OMA Energy Committee Gets Insight Into Markets During Turbulent Times

This week, the OMA Energy Committee held its first quarterly meeting of 2020 to review numerous regulatory and legislative matters that could affect Ohio manufacturers, including post-House Bill 6 activity and the December 2019 FERC order.

The next meeting of the OMA Energy Committee is scheduled for Thursday, May 21. All members are welcome to register for in-person or by-phone participation. 3/12/2020 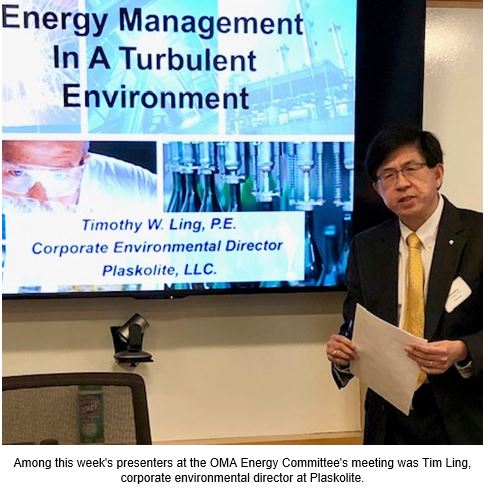 How Would You Decide These Ohio Cases on Electricity Rates?

Regulatory proceedings have big impacts on how much Ohioans pay for their electric service. To drive that point home, the Energy News Network this week published an online, interactive segment that allows readers to decide how they would rule on real cases recently decided by the Public Utilities Commission of Ohio or the Supreme Court of Ohio. After answering, readers find out how their answers compare to what actually happened. 3/12/2020

This week, Brad Belden — president of The Belden Brick Company, Canton, and chair of the OMA Energy Committee — testified before the Ohio Senate Energy and Public Utilities Committee. In addition to making suggestions for an improved regulatory and policy environment, he told senators to stay the course on deregulation, cautioning against a state-administered capacity pricing mechanism for nuclear, coal, and solar generation (similar to the one that currently faces disqualification from the wholesale market). 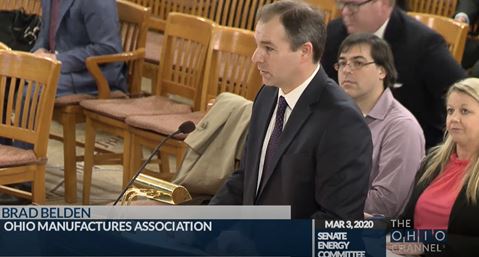 What Would a Fracking Ban Mean for Ohio?

A new study shows a ban on federal leasing and fracking would have dire consequences for businesses and families nationwide. Commissioned by API, the study finds such a ban, which some presidential candidates have proposed, would threaten as many as 7.5 million U.S. jobs in 2022 alone, lead to a cumulative GDP loss of $7.1 trillion by 2030, and lower household incomes by $5,400 annually. Among the hardest hit states would be Ohio, with an estimated 500,000 lost jobs. Get more details. 3/5/2020

It’s not too late for members to register for the OMA Energy Committee’s first meeting of the year, set for Thursday, March 12, in Columbus. Members may participate either in person or by phone. The meeting will be held from 10 a.m. to 1 p.m., and it includes lunch. Key topics will include FERC’s December order on state-subsidized power, Nexus Transmission Pipeline opportunities for manufacturers, and natural gas and electricity forecasts. 3/5/2020

The Energy News Network and the Ohio Center for Investigative Journalism have published a story that maps the “dark money” network that supported House Bill 6, the nuclear bailout law. The disclosure filings show FirstEnergy’s generation subsidiary paid nearly $2 million to Generation Now, “one of the special interest groups that orchestrated ads, political donations and other efforts.” But the story also notes that legal loopholes make it harder to find out the total spent and who else was behind the campaign. 3/6/2020

The company formerly known as FirstEnergy Solutions (FES) announced late last week it has successfully exited Chapter 11 and adopted its new name: Energy Harbor. In 2018, FES entered bankruptcy and in 2019 convinced Ohio lawmakers to enact House Bill 6, which is set to provide an estimated $150 million a year of ratepayer-funded subsidies to the company’s two nuclear power plants. 3/2/2020

In 2019, U.S. annual wind generation exceeded hydroelectric generation for the first time, according to a report this week from the U.S. Energy Information Administration. The agency notes that “wind capacity additions tend to come online during the fourth quarter of the year, most likely because of tax benefits.” 2/26/2020

The Public Utilities Commission of Ohio is giving Ohio’s investor-owned utilities until Sept. 30 to accept applications for energy-efficiency rebates. The utilities will then have until Dec. 31 to wind down their energy efficiency programs, as required by House Bill 6. The elimination of the efficiency programs was used as justification for HB 6’s above-market charges, which are set to subsidize select coal, nuclear and solar power plants.

The cost of the efficiency programs may persist into 2021 and be charged to customers via a rider. Manufacturers should consider opting out of this charge-with-no-benefit, as allowed by law. Contact OMA energy engineer John Seryak with questions or for assistance. 2/27/2020

As noted last week in the OMA’s Energy Guide, natural gas prices are low — and they keep dropping. The U.S. Energy Information Administration reports that on Feb. 10, the near-month natural gas futures price closed at $1.77 per MMBtu, the lowest February closing price (in real terms) for the near-month contract since at least 2001. 2/17/2020