In Search of a New PUCO Commissioner

The Public Utilities Commission of Ohio (PUCO), the state agency in charge of regulating utility services — including electric and natural gas companies — announced this week it needs a new commissioner to fill a five-year term that begins April 11, 2020.

Current state law allows no more than three sitting commissioners from the same political party, but does not guarantee representation by both major parties. Two Republicans and two independents currently sit on the commission. Gov. DeWine will select the new commissioner in early 2020. 12/16/2019

DP&L Customers to Pay According to Former Rate Plan

The Public Utilities Commission of Ohio (PUCO) this week approved a request by Dayton Power & Light (DP&L) to withdraw its current electric security plan (ESP) and revert to a prior ESP. The utility sought to withdrawal from the most recent rate plan in the wake of the PUCO ordering DP&L to remove a credit support rider after the Supreme Court of Ohio invalidated a similar charge for FirstEnergy.

Over the objections of consumer groups, the PUCO allowed DP&L to reinstate a rate stability charge, but did not allow DP&L to retain some new riders established in its current plan. The PUCO has stated the change in the ESP will save customers $70 million. Members of the OMA Energy Group will continue to intervene in the ongoing proceedings to protect manufacturing interests. If you are in the DP&L service territory, make sure you are involved. 12/19/2019

The U.S. Energy Information Administration’s (EIA) Annual Coal Report shows that coal mining employment has declined in the past decade as coal demand has decreased. Most U.S. coal is consumed in the electric power sector and has faced increased competition from natural gas and renewable technologies. U.S. coal mining employment fell from 92,000 employees in 2011 to 54,000 employees in 2018, with the most dramatic decrease in the Appalachian region. 12/18/2019

In an effort to better protect captive customers from overpaying, the OMA has commented on numerous issues regarding the proposed rules. At this week’s JCARR meeting, the OMA joined Ohio’s residential consumer advocate to urge the panel to invalidate the rules proposed by the Ohio Air Quality Development Authority.

During the General Assembly’s consideration of HB 6, the OMA was a leading voice calling for an annual audit process to protect customers. This week’s actions watered down the already weak consumer safeguards, making them virtually non-existent. 12/10/2019

If Ohio, Pennsylvania, and West Virginia Were a Country…

“If Ohio, West Virginia and Pennsylvania were a country, they would be the world’s third-largest natural gas producer, behind only the U.S. and Russia.” That’s according to an editorial by Jerry James, president of Marietta-based Artex Oil. This strength in natural gas production gives manufacturers in these states “a competitive edge not seen in decades,” James writes.

As we recently noted, total investment in Ohio’s resource rich shale energy sector has reached $78 billion since tracking began in 2011, according to a recent Cleveland State University study. 12/2/2019

Days before Thanksgiving, FirstEnergy Solutions announced it will rename itself Energy Harbor once its bankruptcy restructuring is finalized. The privately held corporation — which operates Ohio’s two nuclear power plants, as well as other generation facilities — will remain based in Akron.

This week, the Nuclear Regulatory Commission approved a transfer of operating licenses for the nuke plants to the newly named management. The transfers will become effective upon completion of bankruptcy proceedings. Last summer, the Ohio General Assembly approved House Bill 6 to subsidize these facilities. 12/5/2019

By blocking the DP&L charge, Ohio ratepayers are expected to save $315 million over three years, according to reports. 11/25/2019

The current outlook for U.S. natural gas prices at several key regional hubs reflects market expectations for lower prices in January and February 2020, according to the U.S. Energy Information Administration. The agency expects that large volumes of low-cost natural gas from the Appalachia Basin will continue to flow into the Midwest. 11/25/2019 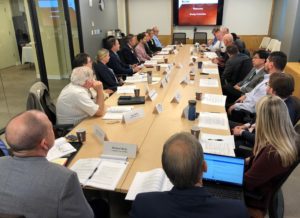 The OMA’s Energy Committee this week held its fourth and final scheduled meeting of the year. Chaired by Brad Belden, president of The Belden Brick Co., the meeting featured policy updates, as well as reports from the OMA’s energy engineer, John Seryak of RunnerStone LLC, and the OMA’s energy counsel, Kim Bojko of Carpenter Lipps & Leland LLP. Members also received briefings on the latest natural gas and electricity market trends.

Recently, House Bill 401 was introduced to strip the Ohio Power Siting Board of its authority to determine where wind farms can be located, instead giving that power to local governments. Sponsored by Rep. Bill Reineke (R-Tiffin), the bill would effectively allow a township to veto an approval by the state entity that has historically been authorized to review applications for new power plants and energy production sites.

A Senate companion bill has been offered by Sen. Rob McColley (R-Napoleon). Both Republican legislators hail from northwestern Ohio, where large-scale wind farms operate, and where some residents have protested plans for new wind projects. This week, nearly 100 witnesses submitted statements to the House Energy and Natural Resources Committee in support of the legislation. 11/20/2019