The Employee Retention Credit (ERC) gave many businesses impacted by COVID-19 the opportunity to file payroll tax refund claims for a much-needed infusion of cash to keep their businesses running. Now, as the 2021 tax filing season kicks off, businesses are wondering about the income tax treatment of the ERC.

In this analysis, OMA Connections Partner GBQ Partners writes that based on IRS guidance, the ERC is not included in a taxpayer’s income. However, an employer must reduce its wage expense for the ERC, effectively increasing taxable income by the amount of the credit. 1/24/2022

The IRS currently has a backlog of more than 10 million unprocessed returns and three million pieces of unanswered taxpayer correspondence. So manage your expectations of the IRS this tax-filing season, OMA Connections Partner Clark Schaefer Hackett says. The firm has published these suggested steps to make tax season more manageable. 1/27/2022

This week, the OMA testified before the Ohio House Ways and Means Committee on House Bill 234, legislation that would repeal the state’s Commercial Activity Tax (CAT), a manufacturing-friendly gross receipts tax that imposes a single low rate of 0.26% on business’ in-state gross receipts above $1 million. (Out-of-state sales are exempt.)

The CAT was created in 2005 — with the support of the OMA — to replace Ohio’s antiquated taxes on corporate franchises and tangible personal property. Prior to the CAT’s enactment, Ohio was at a major disadvantage in attracting new manufacturing due to the machinery and inventory tax.

At this week’s hearing, Rachael Carl, the OMA’s director of public policy services, told lawmakers the CAT has largely been successful, noting that multiple studies have found Ohio is one of the best states in the nation in which to do business. She urged legislators to use caution when considering CAT repeal.

Carl said, “If Ohio can truly forgo the approximately $2 billion in revenue generated by the CAT, we are in. But should the state find itself in a situation in which the foregone revenue becomes an issue for balancing its budget, a repeal-now-replace-later approach would create uncertainty for businesses everywhere.” 1/19/2022 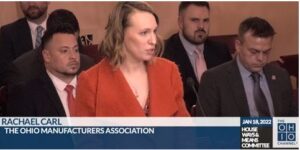 Due to the state’s growing infrastructure needs, Gov. Mike DeWine does not support a temporary reduction of Ohio’s fuel taxes, according to Gongwer News Service.

In 2019, Ohio enacted House Bill 62, which raised the state’s gasoline tax 10.5 cents a gallon and Ohio’s diesel tax by 19 cents a gallon. Earlier this month, Sen. Steve Huffman (R-Tipp City) introduced Senate Bill 277 to reduce the gasoline tax by 10.5 cents per gallon over a five-year period, while cutting the diesel fuel tax by 20 cents per gallon.

Ohio received a grade of C- for its infrastructure in the most recent report issued by the American Society of Engineers. 1/20/2022

Ohio’s non-partisan Legislative Service Commission (LSC) has published this infographic illustrating Ohio’s Unemployment Trust Fund revenue and benefits from 2000-2020. The fund, which is fully paid for by Ohio employers, was last deemed solvent in 1974, according to the U.S. Department of Labor.

In 2021, the OMA successfully advocated for legislation to use pandemic-related relief funds to repay Ohio’s federal loan that funded unemployment benefits during the early months of the pandemic. Without action by the General Assembly and Gov. Mike DeWine, Ohio employers would have faced a substantial tax hike. 1/11/2022

Producer Prices Up 9.7% Over the Past Year

The U.S. Bureau of Labor Statistics reports that the producer-price index rose 0.2% in December from November, the slowest pace since November 2020, which could indicate easing inflationary pressures in the supply chain. Nonetheless, prices remain much higher than a year ago, climbing 9.7% on a 12-month basis, down just slightly from November’s record 9.8% jump.

Ohio’s General Revenue Fund (GRF) — which funds a large portion of state government spending — continues to bring in more tax money than expected. According to the Office of Budget and Management (OBM), the GRF in December surpassed all previous months of the fiscal year, exceeding revenue estimates by $243.6 million (11.9%).

OMA Connections Partner HBK has published this insight into the federal R&D tax credit. In its analysis, HBK discusses what activity makes a business eligible for the R&D credit, how to calculate the credit, and new filing requirements to reduce audits. 1/5/2022