The OMA is one of 350 associations and businesses representing manufacturers who this week called on Congress to ratify the United States–Mexico–Canada Agreement (USMCA). Leaders from the three nations approved the agreement last year to modernize the 25-year-old North American Free Trade Agreement.

Mexico’s government has already ratified the USMCA. It now awaits approval from Congress. The coalition notes that the USMCA would spur economic growth and provide much-needed certainty for manufacturers. See the National Association of Manufacturers’ coverage of this advocacy effort. 10/16/2019

Business and finance publisher Kiplinger has published its 50-state economic outlook for 2020. Kiplinger predicts Ohio’s job growth will slow to 0.4%, down from 0.6% this year.

The publication says: “Ohio’s three major metros of Cleveland, Columbus, and Cincinnati are growing above the state average,” with Cincinnati’s job growth expanding the fastest at 2.2%. Meanwhile, “a number of smaller cities are showing signs of growth after being flat,” including Toledo, Springfield, and Lima.

But Kiplinger adds that Ohio is still at risk from the trade conflict with China, as well as tariffs on imported steel. “Two-thirds of manufacturers in northeast Ohio said they were being harmed by the penalties on metals imports.” 10/16/2019

This week, Jason Stephens — auditor for Lawrence County — was sworn in as the replacement for State Rep. Ryan Smith (R-Bidwell) in the Ohio House’s 93rd District. Stephens (R-Kitts Hill) has served as auditor since 2011 and was previously a county commissioner. He also works as a licensed insurance agent and has his own agency. Former Rep. Smith announced his resignation late last month to lead Rio Grande Community College and the private Rio Grande University. 10/10/2019

This week, Harrison City Councilwoman Cindy Abrams (R-Harrison) was sworn in as the replacement for outgoing State Rep. Louis Blessing in the 29th District of the Ohio House. Prior to her service on the city council, Abrams was a Cincinnati police officer. Earlier this month, Blessing (R-Colerain Township) was selected to fill the vacant 8th Senate District. 10/9/2019

In a recent editorial, Chad Moutray, chief economist at the National Association of Manufacturers, says federal policymakers can provide U.S. manufacturers more certainty by taking just a few key actions. He says Congress must first ratify the United States–Mexico–Canada Agreement. Second, the administration should work to reach an “enforceable, rules-based, bilateral trade agreement” with China. Other steps include passing a long-term reauthorization of the Export-Import Bank and addressing the skills gap in manufacturing by inspiring more people to join the industry. 10/9/2019

Which Goods are Most Traded Between U.S. and China?

Trade talks between the U.S. and China continue to dominate the financial news. Once China’s top export market, the U.S. has since fallen to third. For the year, U.S. imports from China are down 12.5% amid new tariffs — with higher tariff rates set to take effect if no resolution is reached soon. This infographic by HowMuch.net shows which goods are most frequently traded between the two countries. 10/10/2019

For Real: Get Your REAL ID Before the Rush

For those who use the airlines — whether once a week or once a year — you will need a REAL ID by next October in order to board your domestic flight. A REAL ID is essentially an enhanced driver’s license (recognizable by a star at the top) required by federal law to address security concerns raised by the 9/11 Commission.

To get a REAL ID, you’ll need to present a birth certificate or green card, a Social Security card, and two documents that show your address. OMA members may wish to avoid the last-minute rush by getting their REAL ID sooner rather than later. Find out more at the Ohio BMV’s site. 10/7/2019 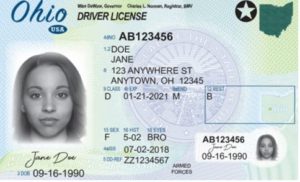 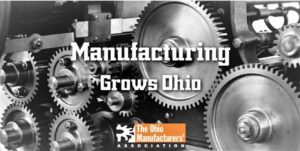 It’s here — Manufacturing Day 2019. Throughout Ohio, manufacturers, community colleges, and others are opening their doors to give students a firsthand look at the many rewarding, well-paying career options in the manufacturing sector.

Not all of Ohio’s MFG Day events will take place today. Several will be held later this month. So if your company wants to host an event to inspire the next generation of manufacturers, there’s still time. (By the way, be sure to send us images from your MFG Day event to share on OMA’s social media.)

Meanwhile, Ohio Gov. Mike DeWine and Lt. Gov. Jon Husted have recognized October as Manufacturing Month. In a proclamation presented to the OMA, the state’s top two leaders point out that Ohio is the third largest manufacturing state — and that manufacturing provides more than 700,000 Ohio jobs, while employing more than 20% of rural Ohioans. 10/4/2019

Burkland: Ohio Can Help Lead the Next Generation of Auto Manufacturing

In a guest column published this week by The Business Journal in Youngstown, OMA President Eric Burkland discusses the biggest change in automotive technology in more than a century — the electrification of cars and trucks — and the opportunity it presents Ohio to power the next generation of automotive manufacturing.

Burkland writes: “With its proposal of a battery cell factory, General Motors is offering Ohio — particularly the Mahoning Valley — the chance to be at the forefront of this revolution.” He concludes that Ohio “cannot afford to miss such opportunities.” 10/2/2019

Late last week, President Trump signed a seven-week continuing resolution into law to keep the federal government running through Nov. 21. Of note for manufacturers, the extension includes a short-term reauthorization of the U.S. Export-Import Bank (Ex-Im). The National Association of Manufacturers’ Linda Dempsey said while this move was a necessary step, Ex-Im users need more certainty to plan for the future. As the nation’s official export credit agency, Ex-Im has served 159 exporters in Ohio since 2015, with a combined $1 billion in exports. 10/1/2019