Gov. Mike DeWine will travel to Japan next month, Sept. 8-13, to seek new opportunities for partnership between the island nation and Buckeye State. Japan is Ohio’s top international investor, with 72,860 Ohioans employed at 852 Japan-owned establishments across the state. Japan is also the fifth largest export market for Ohio products, base on 2018 data.

As part of his trip, the governor will participate in the Midwest U.S.-Japan Association’s annual conference. Accompanying him will be Director Lydia Mihalik of the Development Services Agency, as well as JobsOhio President J.P. Nauseef. 8/14/2019

The new state budget (House Bill 166) — passed and signed in mid-July — includes a provision to create the Ohio Maritime Assistance Program. Under this new program, certain port authorities can apply for grants to construct new marine cargo terminals or improve existing terminals on the shores of Lake Erie or the Ohio River. Funded at $23 million over the biennium, the program will rely on dollars used by the state to award loans to businesses for land and building acquisition, construction, expansion or renovation, and equipment purchases.

Ohio is among the top ten states for maritime port freight, yet has not historically invested state revenue into port infrastructure, as do larger port states. The OMA supports the utilization of state funds to enhance Ohio’s maritime ports, and the association welcomes the funding provision in the new budget. 8/15/2019

The Federal Reserve Bank of Cleveland’s newly released Cleveland Metro Mix indicates that the city’s economy continues to improve. While employment grew slowly in 2018, the metro’s unemployment rate dropped steadily in the early part of 2019, landing at 4.3% in May. Manufacturers have played a key role in that improved statistic, with manufacturing employment growing 2.2% year-over-year as of December 2018. Moreover, manufacturing accounted for about one-third of the 7,728 net new jobs in the metro area between December 2017 and December 2018. 8/6/2019

The Federal Reserve Bank of Cleveland has also released its latest Metro Mix report for Cincinnati. At 3.6% as of April, Cincinnati’s unemployment rate was 0.4% lower compared to a year earlier. Manufacturing has been a top performing sector in the metro for several months, with 2.8% employment growth year-over-year. From December 2017 through December 2018, manufacturers in and around Cincinnati added more than 3,270 jobs, while outpacing the statewide and U.S. economic growth averages for the sector. 8/6/2019

Ohio’s manufacturing industry has earned a solid overall grade of “B” in Ball State University’s annual report card that critiques each state’s manufacturing sector. The study considered several factors across eight broad categories, including taxes, human capital, and global reach. Ohio’s top grade came in logistics (“A”), while its lowest grade was for worker benefit costs (“C-“). The only category in which Ohio declined from 2018 was sector diversification, dropping to a “B-” from a “B.” Only five states were given a grade of “A,” but four of them are in the Midwest or are neighboring states: Indiana, Iowa, Kentucky, and Michigan. 8/7/2019

At Groundbreaking in Lancaster, Pence Calls for Ratification of USMCA 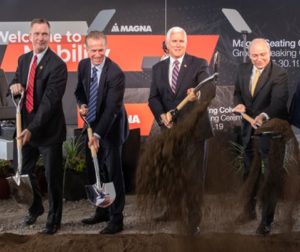 Vice President Mike Pence visited Fairfield County earlier this week to lead a groundbreaking ceremony for OMA member and auto supplier Magna Seating. The $60 million manufacturing facility near Lancaster will provide an estimated 300 jobs by 2021. It will be Magna’s fifth manufacturing plant in Ohio.

Speaking to more than 300 attendees, the vice president focused on the need for Congress to approve the USMCA trade deal yet this year. The NAFTA replacement would encourage more goods and materials to be manufactured in the U.S., he said. Canada and Mexico buy more manufactured goods from Ohio than the rest of the world combined. As of 2017, Ohio’s top export to both those countries was transportation equipment, totaling nearly $8 billion. 7/30/2019

The Thursday, Aug. 22 meeting of the OMA Government Affairs Committee will be hosted by Anheuser-Busch at its Columbus brewery, 700 Schrock Road, from 9:30 a.m. to 1 p.m. An optional tour and beer tasting will take place afterwards. This is a good opportunity to gain greater insight into the broad spectrum of recent state legislative activity. Register online or call (800) 662-4463. 8/1/2019 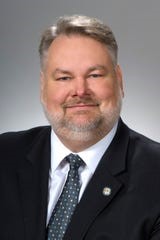 State Rep. Mark Romanchuk (R-Mansfield) has announced he will run for the upper house in 2020, vying to represent Ohio’s 22nd Senate District. The seat is currently held by Senate President Larry Obhof, who is term-limited.

In his announcement, Rep. Romanchuck said: “I look forward to continuing to fight for the conservative principles of lower taxes, less spending, and more jobs for the people of Richland, Ashland, Holmes, and Medina counties as a member of the Ohio Senate.”

Mark and his wife Zoi own a manufacturing firm, PR Machine Works, Mansfield, which is an OMA member. OMA staff members frequently work with Mark on policy matters. He brings a strong background in business and data analysis to his work in the General Assembly. Learn more about Mark and how to support his campaign. 8/1/2019

Richard Rogovin, chairman and general counsel of OMA member U.S. Bridge in Cambridge, Ohio, has been appointed to the advisory committee of the Export-Import Bank of the United States (Ex-Im). The advisory committee, as required by Congress, advises Ex-Im on its programs, which provide competitive financing to support American jobs through exports. Ex-Im is self-funded through user fees it collects.

In May, the U.S. Senate confirmed Kimberly Reed as president of the Ex-Im, along with two other board appointees, allowing the bank to once again approve loans greater than $10 million. The OMA strongly supports the Ex-Im, which serves 200 exporters in Ohio with a combined $1 billion in exports.

Ex-Im’s full operations risk ceasing again Sept. 30 when its charter is scheduled to expire. The NAM this week announced its support for bipartisan legislation that would reauthorize the bank for 10 years. 8/1/2019

In the latest 50-state comparisons by Business Facilities magazine, Ohio and its manufacturing muscle fare well in several categories. As expected, the Buckeye State finished strong for overall manufacturing employment (No. 3) and automotive manufacturing strength (No. 2). Some of Ohio’s other top 10 rankings include the following:

The publication found the best overall business climate in Tennessee, due in large part to its “customized workforce training, prefertilized sites, and lower industrial electricity costs.” 7/30/2019