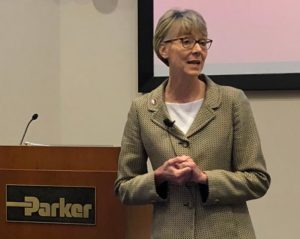 The OMA’s Government Affairs Committee was hosted this week in Cleveland by OMA member Parker Hannifin.

This was in response to member requests for more regional events.

Justice Mary DeGenaro addressed committee members. DeGenaro was appointed to the Supreme Court of Ohio by Gov. Kasich after Justice William O’Neill resigned earlier this year. She is running this fall to maintain her seat on the bench. The OMA-PAC has endorsed Justice DeGenaro as well as Judge Craig Baldwin, who is seeking an open seat on the Supreme Court. Baldwin currently serves on the Fifth District Court of Appeals. 9/13/2018