Meanwhile, the U.S. government’s five-year offshore leasing program is at risk of not being renewed. The NAM is urging manufacturers to contact their federal representatives. 9/20/2022

As reported by Cleveland.com, while it’s unclear why Strah decided to step down, the move comes just after a company review of its management team. That review was part of an HB 6-related lawsuit settlement.

Meanwhile, the U.S. Strategic Petroleum Reserve has dropped to a level not seen in 38 years, Reuters reports. According to the Institute of Energy Research, the reserve is expected to shrink to a 40-year low by the end of October, with an anticipated 358 million barrels compared to 621 million barrels a year ago. 9/15/2022

Photos from the event have been posted on the OMA’s social media channels — LinkedIn, Twitter, and Facebook.

A special thanks to the sponsors of this timely OMA event. 9/8/2022 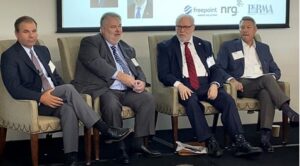 Visual Capitalist reports that the energy price spike of 2022 is the second highest since the price shocks of the 1970s. The website has published this infographic, which illustrates energy (and food) inflation over the past five decades. The site notes that the price of oil influences as much as 64% of food price movements. 9/7/2022

The Ohio Manufacturers’ Energy Conference, set for Sept. 8 in Westerville, will provide expert analysis regarding the electric and natural gas markets, Ohio’s natural gas assets, controlling costs with energy efficiency, and much more. You still have time to register. (Here’s the full agenda.) 8/31/2022

Not Too Late to Register for OMA Energy Conference

State regulators have paused four investigations tied to FirstEnergy’s 2019 lobbying to advance the scandal-plagued House Bill 6. Public Utilities Commission of Ohio Chair Jenifer French says this is “a temporary stay” and the PUCO will continue with its investigations “when it is appropriate to do so.”

The stay was recently requested by U.S. Attorney Kenneth Parker who wrote that the PUCO’s cases could directly interfere with or impede the ongoing federal investigation. Here’s more on this development as reported by Gongwer News Service. 8/24/2022

Michigan Suffers Setback in Its Effort to Close Line 5

Here’s another twist in the legal battle over the Enbridge Line 5 pipeline, initiated by leaders in that state up north. A federal judge has refused to remand the case to a Michigan county court. Fortunately, this is a setback for Michigan’s efforts to shut down the pipeline, reports say.

If Line 5 were shut down, Ohio would bear the brunt of an estimated $20.8 billion in economic losses. The OMA is on record in support of the pipeline remaining operational. 8/25/2022