On June 21, the OMA’s annual meeting and Q2 board of directors’ meeting was held at the OMA’s headquarters in Columbus. Board members were briefed on legislative and legal developments that could impact Ohio manufacturers, and members discussed challenges and opportunities facing the industry.

During the meeting, the following individuals were elected to serve on the OMA board:

The OMA board is currently comprised of 27 Ohio manufacturing leaders, representing manufacturers of all sizes and sectors within the industry and from all regions of the state. Board members will meet again Sept. 20. 6/19/2022

Ohio’s Aug. 2 special primary for state legislative races is quickly approaching. Manufacturers and their employees should note that the voter registration deadline for new voters — and those who’ve changed addresses — is July 5. Early voting begins July 6. See the full 2022 election calendar, as well as the new state legislative districts. 6/22/2022

Ohio’s five largest business groups — including the OMA — gathered June 23 at Taylor-Winfield Technologies in Youngstown to show their support for the campaigns of three Supreme Court of Ohio candidates. The groups’ political action committees are endorsing Justice Sharon Kennedy for chief justice, as well as Justices Pat DeWine and Pat Fischer for re-election.

The Court can and does have a tremendous impact on the business climate in Ohio. OMA’s Political Action Committee (OMA-PAC) has expressed support for Kennedy, praising her for “not legislating from the bench,” while commending DeWine and Fischer for demonstrating fairness, impartiality, and judicial restraint, which benefit Ohio’s manufacturing competitiveness.

The event was organized by Rachael Carl, managing director of the OMA’s public policy services. Here’s media coverage, as well as the OMA-PAC’s endorsement announcement from earlier this year. 6/23/2022

OMA Connections Partner Plante Moran is producing a five-part webinar series to help manufacturers address current challenges through improved data, operations, and technology. Three of the webinars are ready to watch on demand. You can also register for Plante Moran’s July 19 webinar, which will focus on using Industry 4.0 to realize value creation and competitive advantages. 6/20/2022

The World Trade Organization has lifted intellectual property protections to allow developing countries to produce and export COVID-19 vaccines. The move was criticized by the pharmaceutical industry as well as the National Association of Manufacturers, which expressed disappointment that the U.S. “would join other countries to give away manufacturers’ innovations to our commercial rivals.” 6/20/2022

Meanwhile, the head of DHL’s freight-forwarding unit says congestion at the ports won’t begin to ease until 2023 — and even then there won’t be a return to pre-COVID-19 levels. 6/17/2022

In an editorial at Cleveland.com, OMA President Ryan Augsburger provides his take on manufacturing as a focal point in this year’s political campaigns. Augsburger urges bipartisan solutions, not political pandering, writing: “The best way for candidates to support Ohio manufacturers — their companies, employees, families, and communities — is not to fight over them, but to fight for them.” Read the full editorial. 6/13/2022

On June 14, Gov. Mike DeWine signed into law a two-year, $3.5 billion spending measure (House Bill 687) that, among other things, will expedite Intel’s efforts to construct a pair of semiconductor manufacturing facilities in Ohio. Among the capital budget bill’s Intel-related provisions is a $600 million Ohio Onshoring Incentive, funding for local water and sewer infrastructure improvements, and road upgrades. For more, see this report by Gongwer News Service. 6/15/2022

A 2017 graduate of Miami University, Lindsey comes to the OMA after a three-year stint with Government Edge, a multi-client lobbying firm based in Columbus. At Government Edge, she served as manager of government relations. Before that, Lindsey worked at the Ohio House as a legislative aide to former Rep. Niraj Antani (R-Miamisburg). She also served as an intern for the 2016 campaign of U.S. Sen. Rob Portman (R-OH).

It has been an eventful month for Lindsey, who married her husband Jon on June 4. They reside in Grove City with their two dogs, Benji and Fitzgerald. Email Lindsey to say hello. 6/15/2022 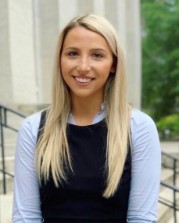 Wage inflation is fueling more demand for workplace robots in the U.S., according to reports. New orders for robots surged 40% year-over-year in Q1 of 2022. Roughly 9,000 robots — worth approximately $544 million — were sold compared to around 6,400 the same period a year earlier.

According to the Association for Advancing Automation, the leading industries for robot orders in Q1 were metals (+40%); plastics and rubber (+29%); semiconductor, electronics, and photonic (+23%); and food and consumer goods (+21%). Some are calling this the “summer of robots” as the industry enters a new stage of development. 6/6/2022