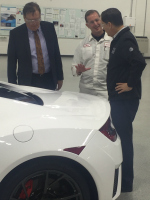 This week, the National Association of Manufacturers (NAM) 2017 State of Manufacturing Tour made stops at Honda, Anheuser-Busch, and Worthington Industries in central Ohio.

The purpose of the tour is to reignite the American imagination of what’s achievable in modern manufacturing.