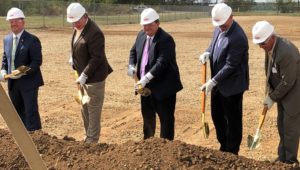 This week, DuPont broke ground on a new, $220 million expansion of its Circleville facility. Already one of the largest employers in Pickaway County — employing 500 full-time workers — the company is expected to add around 50 new jobs. The expansion will allow DuPont to increase its ability to manufacture Kapton® — a durable and versatile plastic film used in numerous applications, from cell phones to space travel.