The OMA joined forces with 214 other national, state, and local organizations in sending a letter to encourage Congress to pass H.R. 4775, the “Ozone Standards Implementation Act of 2016.”

Supporters of Senate Bill 51 are calling for increased regulation on the chemical industry and a reduction of toxic chemicals in the environment.  The bill would designate May as “Multiple Chemical Sensitivity Month.”

Senator Mike Skindell (D–Lakewood), sponsor, justified the bill citing research in 2003 indicating that more than 12% of the U.S. population was affected with severe multiple chemical sensitivity.

On April 20, Ohio EPA will be offering a webinar entitled, “Encouraging Environmental Excellence (E3), How to Gain Recognition for Your Organization’s Efforts.”

From OMA Connections Partner Jones Day:  “The U.S. Supreme Court’s recent stay of the EPA’s Clean Power Plan prevents the Agency from enforcing the Plan’s provisions until certain legal challenges are ruled on by federal courts. Oral arguments before the D.C. Circuit are scheduled for early June 2016, after which a Supreme Court appeal of that decision is almost certain. All of this combines to make delaying the Clean Power Plan’s implementation almost inevitable, but the Agency has yet to explicitly acknowledge that state compliance deadlines will be postponed.”

To combat lead in Ohioans’ drinking water, this week the governor’s office announced a package of reforms that will be introduced next week in the General Assembly.

The bill will also require communities to enact a public education campaign within 30 days if a community exceeds the federal lead threshold.

Finally, the bill will give Ohio EPA flexibility in tightening water testing requirements and extending term loan financing for communities that are attempting to upgrade older systems.  You can read the proposed provisions here. 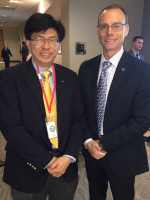 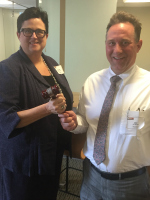 In her capacity at ArcelorMittal, Julianne works with trade organizations, consultants, law firms and other interested parties to assess proposed environmental regulations, develop comments and support ArcelorMittal’s interests in environmental sustainability in a competitive global market.  ArcelorMittal is the largest steel company in the world, and its U.S. operations encompass more than 20 facilities in 10 states.

Under Title V of the amendments, facilities that have the potential to emit certain amounts of air pollution are required to apply for and obtain a state-federal operating permit and pay emission fees.

In Ohio, facilities are categorized into three types for purposes of deciding which reports are required to be filed on April 15 each year.  A site is either Title V or Non-Title V.  Your facility type in turn determines the level of detail, the reporting mechanism for reporting facility-wide emissions, pollutants included, and the amount of fees that are charged.  It also determines whether or not an Emissions Inventory and/or an Emissions Statement is required to be filed simultaneously.  See more at the Ohio EPA website.

This week the OMA joined more than 160 business groups throughout the country in filing an amicus brief in the U.S. Court of Appeals for the D.C. Circuit in support of a lawsuit by states and industry to overturn U.S. EPA’s “Clean Power Plan.”

The brief outlines major legal and economic concerns with the rule, arguing that U.S. EPA trampled the rights of states to determine their own energy mix and implement environmental standards in a manner tailored to their own circumstances.

The court is likely to issue a decision later this year.  From there, the challenge is expected to make its way to the U.S. Supreme Court, which previously issued a stay to halt all implementation and enforcement actions on the rule until it has the opportunity to hear the case.

The new STREAMS system uses a smart document online that catches errors before the application is complete, and documents are submitted electronically to the agency, minimizing data entry time.  Payments can be made electronically, and permit holders can also submit monitoring reports electronically.

Every general permit is still reviewed by agency staff to ensure the applicant meets the criteria to qualify, but STREAMS makes the permitting processing more efficient, shaving valuable days off the process.