Many AEP Ohio customers have been approached by the utility to consider a long-term solar arrangement in support of two solar projects it would like to develop. While this specific transaction is more complicated than traditional structures due to its regulated nature, it has likely initiated sustainability and renewable energy conversations within many companies. See the analysis on Ohio’s primary renewable energy deal models. 10/23/2019

America’s energy boom continues. In mid-October, working natural gas inventories in the lower 48 states exceeded their five-year average for the first time in more than two years, according to the U.S Energy Information Administration (EIA).

On a related note, a study unveiled this week found that natural gas end-users — including manufacturers — “have realized $1.1 trillion in savings since 2008 due to increased natural gas production in the Shale Crescent USA region (Ohio, Pennsylvania, and West Virginia).”

Meanwhile, the EIA reports that the U.S. now exports crude oil to more destinations than it imports from. 10/22/2019 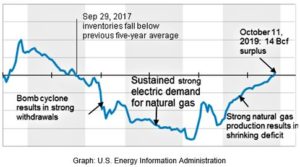 Three months ago, Gov. Mike DeWine signed House Bill 6 — the nuclear bailout legislation — thereby forcing electric utility customers to pay more in the form of new riders on monthly power bills. When the law is implemented, the proceeds from the new charges will go mostly to the owners of two nuclear power plants.

Last spring and summer, the OMA worked to oppose the anti-free market HB 6. The campaign committee attempting to allow Ohio voters to make the final determination regarding HB 6’s fate must submit nearly 266,000 valid signatures this Monday, Oct. 21. If the Ohioans Against Corporate Bailouts fails to collect the required number of signatures, there will be no referendum on next November’s ballot. Signatures are still being collected.

Read this powerful guest column by Ohio State University professor Ned Hill, who describes how FirstEnergy and FirstEnergy Solutions have engaged in subterfuge to confuse voters and deter them from exercising their right to sign a petition. 10/17/2019

A whole lot of activity is underway in the opaque world of state agencies working to implement House Bill 6. In providing massive, unjustified handouts to select utilities, the legislation delegates sweeping new powers to government agencies, mostly at the PUCO and at the Ohio Air Quality Development Authority (OAQDA).

A series of government decisions will determine how much you pay for the bailout and other HB 6 charges. Parties must formally intervene with counsel to monitor the proceedings and be heard. Fortunately, the OMA Energy Group is intervening to protect the interests of Ohio’s manufacturing economy. Be sure your company is supporting this effort. Contact OMA staff to learn how. 10/17/2019

In early September, lawyers for FirstEnergy Solutions challenged the referendum campaign being waged to repeal House Bill 6. They argued that the proposed referendum should not be allowed to proceed because new customer charges are a “tax” and according to the Ohio Constitution, any legislation that adjusts “tax” charges is not subject to repeal by referendum. The same lawyers who made that novel argument asked the Supreme Court of Ohio to expedite the case.

This week, the Supreme Court denied the request to expedite. So, some good news for a change on this terrible bill. 10/17/2019

Thinking About a PPA? Watch This Webinar

Many manufacturers are currently being invited to enter into contracts — known as power purchase agreements (PPAs) — to secure renewable energy. The OMA advises members to beware of energy proposals that don’t make good business sense or may run afoul of Dodd-Frank and other financial regulations.

To provide guidance to members on PPAs, we recruited subject-matter expertise to help manufacturers understand the pros and cons of new energy products and services. At your convenience, listen to this free, recorded OMA webinar called “Renewable Energy Trends & Power Purchase Agreements.” The expert insight will be helpful as you negotiate potential PPAs.

We will also discuss this matter at our upcoming OMA Energy Committee meeting on Nov. 21. 10/17/2019 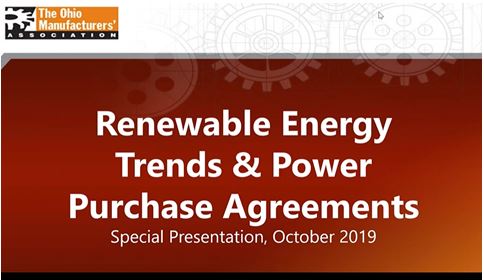 This week at the Statehouse, representatives from Ohio’s electric distribution utilities appeared before a House panel in support of House Bill 247. Sponsored by State Rep. Dick Stein (R-Norwalk), HB 247 seeks to further erode Ohio’s deregulation law, exposing customers to new costs from riders that would pay for electric car charging stations and other enterprises that would compete with unsubsidized businesses.

During his questioning, State Rep. Bill Seitz (R-Cincinnati) noted that under House Bill 6 — the nuclear bailout law approved this summer — utilities were successful at including language allowing them to overcome provisions in existing law that prohibit utilities from selling generation.

Under Ohio’s sweeping deregulation law of 1999, regulated monopoly distribution utilities are restricted to only delivering electricity — a move that allows numerous electricity generators to compete. Deregulation has delivered customers more than $24 billion in generation savings, according to a recent study. But under HB 247, monopoly distribution utilities would get an unfair advantage. Read this analysis by OMA energy engineer RunnerStone LLC. Join the discussion by participating in the OMA Energy Committee’s Nov. 21 meeting. 10/10/2019

Earlier this year, House Bill 246 was introduced as a placeholder; that is, without any substantive language — only an intent to modernize the Public Utilities Commission of Ohio and the Office of Consumers’ Counsel.

This week, State Rep. Jamie Callender (R-Concord Township) said in an interview with Gongwer News Service that he anticipates hearings this fall, but that specifics are still up in the air. The OMA agrees there is a need to update utility laws to better protect customers from being overcharged. Recently approved state legislation has instead protected utilities at customer expense. 10/9/2019

Won’t Get Fooled Again: HB 6 Does Not Benefit Energy-Intensive Manufacturers

The ultimate fate of House Bill 6 — Ohio’s nuclear bailout law — will not be known until a referendum campaign is played out. That could happen as soon as late October if the campaign fails to gather enough valid signatures. Or the question may languish until November 2020 if the referendum is successfully placed on the general election ballot. (The referendum group has until Oct. 21 to collect more than 265,000 valid signatures.)

The OMA is working to ensure that the needs of manufacturers are considered throughout the HB 6 implementation process, which is already well underway. Even though the law’s provisions have not yet gone into effect, some parties erroneously believe HB 6 will deliver benefits to energy-intensive customers. If you are in this camp, you owe it to yourself — and your company — to review why HB 6 does not benefit manufacturers. Read the myths surrounding HB 6. 10/2/2019

This week, opponents of House Bill 6 began hitting the airwaves with an advertisement — taking aim at the billion dollar bailout of the owners of nuclear power plants and utilities. Ohioans Against Corporate Bailouts continues to collect signatures in hopes of placing a proposed referendum before Ohio voters next November. Signatures are due to be submitted by late October. 10/2/2019