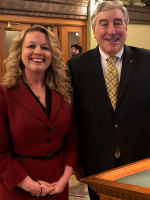 The OMA told members of the Senate Public Utilities Committee this week that manufacturers oppose bailouts of unprofitable power plants.

Testifying on behalf of the OMA, OMA energy counsel Kim Bojko of Carpenter Lipps & Leland expressed opposition to the most recent version of Senate Bill 155, which would provide a subsidy to maintain uneconomic power plants owned by the Ohio Valley Electric Corp. (OVEC), including a plant in Indiana.

Bojko reminded lawmakers that the bill is a departure from the pro-market policies of the state regarding electric generation and competitive retail electric service.