House Bill 114 rocketed through the Ohio House of Representatives in March 2017 with more than 50 bi-partisan co-sponsors. The bill was the latest installment of legislative actions to weaken Ohio’s energy efficiency and renewable energy standards. The bill is a mixed bag for manufacturers.

The bill now has died in the Senate, so the energy standards remain in effect. There will be more to come next session on this one. Make sure you are plugged in to the OMA’s Energy Committee in 2019 to engage. 12/20/2018

As the legislature heads home, electricity customers can breathe a sigh of relief knowing that billions of dollars of costs have been averted.

The current 132nd General Assembly session will soon adjourn sine die. The lawmakers adjourn without acting on five separate bills that would have forced customers to bailout uneconomical nuclear and coal power plants.

Ohio is one of the only states to have repelled state legislated subsidies for certain nuclear and coal power plants. New Jersey, New York, Illinois, and Connecticut have all adopted legislation. Pennsylvania has also been considering such a proposal.

Congratulations to the manufacturers who led the fight against these bills. 12/20/2018

Ohio EPA recently issued comment to U.S. EPA regarding its proposed guidelines for greenhouse-gas emissions from existing electric utility generating units. The Trump administration proposed the air pollution guidelines known as the Clean Air Act (CAA) to replace the far-reaching Clean Power Plan (CPP) which had been proposed by the Obama administration.

In his cover letter, Ohio EPA Director Craig Butler highlighted the market-driven transformation taking place in the Ohio energy and electric sector. The director wrote: “ … Ohio’s generation mix is being positively influenced by shale gas, renewables and energy efficiency which is keeping costs low, as well as reducing emissions. This is being accomplished without additional regulatory burden …”

Check out this table included in the Ohio EPA comments; it depicts how Ohio CO2 emissions from power generation have been reduced 38% from 2005 levels. 12/13/2018

Last week AEP held a public hearing on its application to mandate that all customers pay for a large solar power generation facility that the Columbus-based utility proposes to develop in Highland County in southern Ohio.

The hearing featured presentations from many individuals and organizations that support the project. Witnesses included labor leaders, Appalachian advocacy organizations, universities, environmentalists and even a coal industry executive. Read more about the packed house of supporters.

The OMA Energy Group, a party in the case, as well as other customer groups and competitive suppliers, firmly opposes the application. While the OMA has a long history of support for reasonable renewable-energy development in a competitive market, this application is badly flawed.

Customers should not be required to pay for and guarantee the risk for this project unless AEP can prove to state regulators that there is a need for the power plant that will be paid for by ratepayers. It’s a well-known fact that the region presently enjoys a significant surplus of electric capacity. 12/13/2018

Time to pull out and dust off your electricity and natural gas supply contracts to find out if you are exposed to a variable market rate. Why? Because if you are on a market rate this winter, you will be in store for a major case of sticker shock for your business and home.

Natural gas and electricity prices for delivery this winter have increased dramatically moving up by more than 35% since early November. Natural gas futures for January delivery have not been this high since 2014 and are bouncing between $4.40 and $4.80 per dekatherm (dth).

Last week the PUCO held its first PowerForward collaborative meeting. PowerForward is the brand state regulators have given to their investigation into the power grid of tomorrow.

The main topic of this first meeting was how the power grid will be affected by a growing population of electricvehicles (EVs). Much of the discussion centered on rate-basing EV charging stations. In other words, require customers to pay for charging stations via a new rider on your power bill.

A presenter from Ohio EPA reported that the state has allocated nearly $12 million from the VW vehicle emissions settlement to support EV fueling construction. Click to view meeting agenda and presentations.

A lot of really cool testimony and information was incorporated into the PUCO’s PowerForward final report. The goal of PowerForward – informing regulators of industry best practices for the power grid – is commendable. Unfortunately, PowerForward is increasingly being used by utilities to justify customer-paid grid modernization projects that don’t actually provide meaningful customer benefits.

Stay active in the OMA Energy Committee to help formulate the best policy solutions for manufacturers. 12/13/2018

Over the appeals of OMA Energy Group and the Office of the Ohio Consumers’ Counsel, the court authorized AEP Ohio to implement a Power Purchase Agreement Rider (PPA Rider), which includes cost recovery for the OVEC generating plants, which are obsolete, uneconomic coal plants.

The court failed to recognize that the PPA Rider does not benefit customers and is counter to the state policy of avoiding anticompetitive subsidies and advancing competitive markets.

OMA-backed HB 247 is the perfect vehicle to correct the errors that occurred in this case and will protect customers from subsidizing monopoly utility companies.

Read an analysis of the decision from OMA energy counsel Kim Bojko of Carpenter Lipps & Leland. 11/28/2018

PJM issued a report wherein it said that, contrary to proposals that have been advanced throughout the past year, the pending retirements of uneconomic coal and nuclear power plants do not threaten grid resiliency.

As such, PJM concluded that bailout efforts such as those proposed by the Department of Energy and the White House are not necessary.

Members of the OMA Sustainability Peer Network (SPN) converged on Findlay on October 26 to learn how Whirlpool Corp. is reducing waste and innovating the manufacturing processes at its dishwasher plant.

The event included a tour of the North Findlay Wind Campus, which is supplying Whirlpool Corp.’s Findlay plant and Ball Corp. with onsite wind energy under a twenty-year power purchase agreement.

The wind farm is operated by OMA Connections Partner, One Energy.

The SPN is open to OMA manufacturing members. Members work together to share best practices related to efficiency, waste reduction and other facets of sustainable manufacturing. Sign up here or contact OMA’s Ryan Augsburger to learn more. 10/26/2018 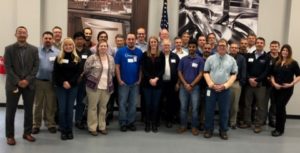