Ohio’s primary election is only days away, this year falling on St. Patrick’s Day, March 17. Due to coronavirus concerns, there have been many voting-related questions. Ohio Secretary of State Frank LaRose reports that he’s working with Ohio’s 88 county board of elections and health officials to promote a safe and healthy voting environment. (Get the latest election updates here.)

Employers can provide non-partisan resources to employees — as long as communications are unbiased — so you may wish to share the following information:

There’s a lot of other useful Election Day information at the secretary of state’s website, including how to find your polling place. 3/12/2020

Specifically, the administration will ban entry by immigrants and non-immigrants who were physically present within the Schengen Area during the 14-day period preceding their entry or attempted entry into the U.S. The proclamation is effective at 11:59 p.m. EDT Friday, March 13, and will remain in effect until terminated by the president. These restrictions do not apply to U.S. goods imports from the European Union. According to the proclamation, “the free flow of commerce between the United States and the Schengen Area countries remains an economic priority for the United States.” 3/12/2020

The next Government Affairs Committee meeting is set for Wednesday, June 3 in Columbus. 3/5/2020 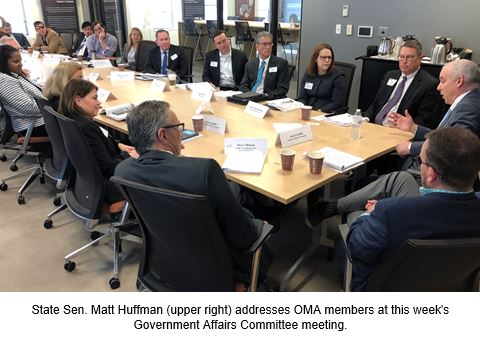 The Manufacturing Institute has announced the winners of its STEP Ahead Awards for outstanding women in manufacturing. These 100 honorees and 30 emerging leaders — including eight Ohioans — work everywhere from the factory floor to the C-suite and show the true breadth of the industry’s talent. The honorees will travel to D.C. for a two-day career building seminar and an April 30 awards ceremony.

You can read about the winners, including those who represent Ohio companies. Congratulations to this year’s honorees! 3/3/2020

Site Selection magazine has awarded its annual Governor’s Cup to Ohio and Gov. Mike DeWine for attracting the largest number of economic development projects per capita in 2019. Last year, the Buckeye State recorded 448 major projects — second overall only to Texas (859). To qualify, projects needed to meet one or more of the following: a minimum investment of $1 million; creation of 20 or more new jobs; or 20,000 square feet or more of new space.

When comparing U.S. communities that did well in attracting new business and investments, Site Selection ranked Cincinnati and Columbus in its top 10 of Tier 1 metros (populations over 1 million). Dayton was No. 1 among Tier 2 metros (populations between 200,000 and 1 million), while Toledo was No. 8. Lima was sixth among Tier 3 metros. In the comparison of small cities (under 50,000), Ohio led all states with 14 cities. Manufacturing-heavy Findlay was No. 1 out of 551 communities, while Tiffin and Zanesville also cracked the top 10. 3/2/2020

JobsOhio has released its 2019 Annual Report and 2020 Strategic Plan. New payroll stemming from JobsOhio projects was $1.2 billion in 2019 — down slightly from $1.3 billion in 2018 — as 306 projects led to $7 billion of capital investment, down from $9.6 billion. In the category of “advanced manufacturing,” JobsOhio projects yielded 3,163 new jobs and $657 million in capital investment.

The Ohio Ballot Board voted 4-1 this week to OK the so-called “Lifetime General Assembly Term Limits Amendment” — a proposed constitutional amendment that would establish a 16-year lifetime cap on service in the state legislature, starting Jan. 1, 2021. If approved by voters, the amendment would prevent lawmakers from jumping from House to Senate (and vice versa) to avoid term limits. But current lawmakers who aren’t term-limited this cycle would get a fresh start with 16 additional years. Here’s a summary from OMA general counsel Bricker & Eckler.

According to the Institute for Supply Management’s latest index of industry activity, U.S. manufacturing expanded in February, despite concerns over the coronavirus. OMA Connections Partner RSM says it does not expect the PMI index to rise in the near-term, and is recommending to its clients to consider alternative supply chains and evaluate their business models while continuing to invest in their people and technology. 3/3/2020

Since 1984, Impact Ohio has offered informative conferences to provide expert analysis of Ohio’s elections and policy choices that could affect the business community. This month, the organization will host its post-primary election conference on Monday, March 23, from 11:30 a.m. to 3 p.m. in Columbus. For details or to register, click here. 3/4/2020

This week, Gov. Mike DeWine announced the creation of BroadbandOhio, an office dedicated to improving access to high-speed internet across the state. BroadbandOhio will be housed within the Development Services Agency and will serve as a resource for local governments and private industry. 3/5/2020