Despite spending more than $3.5 billion last fiscal year on transportation infrastructure, Ohio gets poor grades for its roads (D grade) and bridges (C+) in the Ohio Council of the American Society of Civil Engineers’ 2021 report card for infrastructure. The report says that 6% of the state’s 44,736 bridges and 17% of its nearly 123,000 miles of public roads are in poor condition.

For an overview of the state’s transportation infrastructure funding, Ohio’s non-partisan Legislative Service Commission has produced this infographic. 2/22/2021

OMA Connections Partner RSM has produced this article to explain why historically low interest rates are providing a rare opportunity for many manufacturing businesses to make long-term strategic investments in technology and other improvements, such as facility upgrades. The firm’s recent survey of middle-market businesses showed that more than half of respondents (52%) expect to boost investment in productivity-enhancing capital expenditures such as software, equipment, and intellectual property over the next six months. 2/24/2021

Last week, U.S. Rep. Warren Davidson (R-Ohio) surprised Dan with an on-site visit to present him with a framed copy of the remarks printed in the Congressional Record honoring Dan’s career and service. 2/16/2021 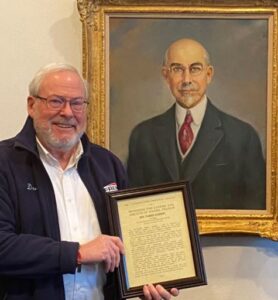 This week, the OMA participated in the second meeting of the Ohio Freight Advisory Committee, convened by the Ohio Department of Transportation (ODOT). The meeting highlighted the statewide shortage of commercial truck parking. (View the meeting materials.)

Next month, the Federal Highway Administration and ODOT will host a truck parking workshop (online) over the course of three days on March 15, 17 and 19. Space is limited. If you have transportation and logistics directors who would be interested in attending the workshops as part of the OMA delegation, please contact staff soon. 2/18/2021

U.S. manufacturing output plummeted more than 20% between February and April 2020, but it has definitely recovered since then. National Association of Manufacturers Chief Economist Chad Moutray reported this week that production output in January was down only 1% from its pre-pandemic pace. January’s 1% gain in output marked the eighth increase over the past nine months.

The firm says that going forward, manufacturers need to be pro-active about adapting their operations by embracing changes associated with the Fourth Industrial Revolution, or Industry 4.0. 2/16/2021

Gov. Mike DeWine announced this week that Ohio State University, Nationwide Children’s Hospital, and JobsOhio are collaborating on a $1.1 billion Columbus Innovation District. The project, which will focus on developing new gene and cell therapies to treat genetic disorders, is expected to create 20,000 jobs over the next decade — most of which will be in the STEM field. (Just last month, Ohio officials announced the new Cleveland Innovation District; the Cincinnati Innovation District was announced in March 2020.)

Approximately 7,500 individuals follow the OMA on one of three social media platforms — LinkedIn, Twitter or Facebook. If you’re not already doing so, consider following us to monitor announcements regarding Ohio manufacturing job creation and investment, as well as helpful insight from OMA Connections Partners.

Also, the “Making Ohio” initiative — established by the OMA and its partners to spotlight career opportunities in modern manufacturing — has its own Facebook page. With more than 1,100 “likes” and followers, this page seeks to engage young people, educators, and community leaders as part of the OMA’s broader workforce strategy. 2/15/2021

This week, the OMA announced that Rachael Carl has been named director of public policy services. Rachael will help oversee the OMA’s advocacy services and lobbying efforts at the Ohio Statehouse and within the executive branch and state agencies.

A native of Grove City and graduate of The Ohio State University, Rachael most recently served as a legislative liaison for the office of Gov. Mike DeWine. Prior to her role in the governor’s office, she was legislative director for the Ohio Department of Commerce and a legislative aide in the Ohio House of Representatives.

The Senate this week unanimously approved Senate Bill 8, legislation to appropriate $20 million to distribute via a competitive grant pool to broadband providers that otherwise would not pursue expansion in an underserved area. The OMA supports SB 8 and the creation of the Ohio Residential Broadband Expansion Grant Program. 2/11/2021