In his nationally syndicated column published this week at Real Clear Politics, economic pundit and recent nominee to the Federal Reserve Board Stephen Moore called Ohio the “comeback state.” The former Wall Street Journal editorial board member lauded the economic progress made by Cleveland, Columbus, and Cincinnati. Moore writes, “Ohio is no longer the Rust Belt. It’s an arsenal of growth. I wish I could say that about my home state of Illinois.” 5/15/2019

Among the multitude of changes to the state’s main operating budget under House Bill 166 was a provision to tie drug prices to an unproven foreign-based pricing index.

Medicaid spending is always a controversial topic in budget legislation, but any time the heavy hand of government is inserted into the marketplace, customers tend to lose in the long term as innovation is stifled. For these reasons, the Pharmaceutical Research & Manufacturers of America (PhRMA) submitted testimony in the Senate this week.

The OMA is concerned that price controls would not stop with medication, but would apply to other products purchased by government. 5/16/2019

This week, the Ohio Senate voted along party lines to approve Senate Bill 1, legislation that would require state agencies to trim regulations by 30%. The bill is a priority for Senate President Larry Obhof (R-Medina). The House has introduced companion legislation, House Bill 115, which has already had two hearings. SB 1 now moves to the other chamber for debate. 5/9/2019

Ex-Im Bank to be Fully Functional Again — for Now 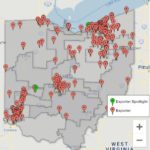 The U.S. Senate this week confirmed Kimberly Reed as president of the Export-Import Bank of the United States (Ex-Im), and two other Trump administration appointees to the board. Now the bank can once again approve loans greater than $10 million, helping U.S. companies compete overseas. The OMA has been strongly supportive of Ex-Im and the need to have the proper personnel in place to allow the bank to carry out its mission.

According to Ex-Im data, the bank serves 200 exporters in Ohio with a combined $1 billion in exports. Nearly 28% of Ohio’s manufacturing employment stems from exports, according to the National Association of Manufacturers (NAM). 5/9/2019

Lt. Governor Jon Husted recently unveiled a new Ohio Opportunity Zone website with tools for businesses and investors. The site notes that the 2017 federal tax law included the Opportunity Zone program, giving “states the chance to examine census tracts and nominate low-income areas with potential for long-term investment to be targeted for a tax-incentive program. … After being designated by the U.S. Department of Treasury, Ohio’s 320 Opportunity Zones began generating attention from investors interested in taking advantage of their favorable tax benefits.” 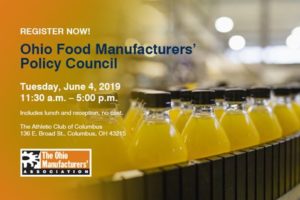 The production of food and beverages contributes nearly $13 billion annually to the Ohio economy, making it the third-largest manufacturing sector in the Buckeye State. That’s why the OMA is hosting the Ohio Food Manufacturers’ Policy Council on Tuesday, June 4, in Columbus.

This is the most important public policy event of the year for Ohio’s food, beverage and food packaging manufacturers.

This year’s “Food Day” agenda will provide opportunities to learn about the important issues and initiatives affecting food and beverage manufacturers. The day’s agenda includes updates from the new state directors of Ohio’s departments of agriculture, transportation and Ohio EPA. The event will also feature experts discussing the impact of tariffs; regulations; workforce development; and national trends, including in the areas of energy and taxation. 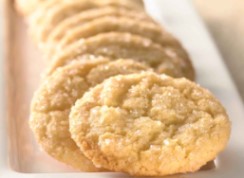 Two Cincinnati-area legislators have introduced a bill to make the sugar cookie the state cookie. No kidding. State Reps. Brigid Kelly (D-Cincinnati) and Jessica Miranda (D-Forest Park) have offered House Bill 235 at the request of a third-grade language arts class from All Saints School in Cincinnati. Currently, at least two states — Massachusetts and New Mexico — have an official state cookie, according to reports. 5/8/2019

Two weeks behind schedule, the Ohio House of Representatives this week put their stamp on the proposed state budget by unveiling a substitute version of House Bill 166. The “sub-bill” is a rewrite of Gov. Mike DeWine’s budget proposal, which was unveiled in mid-March. (Click here for a list differences between the governor’s budget plan and the House version.)

Next week, the House will make another round of changes in an omnibus amendment before voting to pass the amended sub-bill. The Senate is already holding informal budget hearings and will have their turn to make revisions by early June. The Ohio Constitution requires lawmakers adopt a balanced budget by July 1.

A complete review of the budget will be discussed at the June 5 meeting of the OMA Government Affairs Committee. 5/2/2019

As the automotive industry continues to search for new and innovative ways to save on weight, cost and production time, automakers and suppliers are looking to a wider range of materials, including different types of metals and polymer composites. Joining dissimilar materials is one of the major barriers in implementing the right material for the right application strategy.

The results of this study, scheduled to be completed in October, will be published in the public domain and shared at various industry events. 4/29/2019 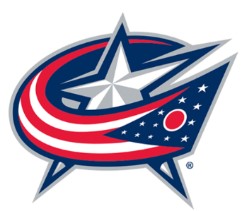 As of the deadline for this edition of the Leadership Briefing, Ohio’s hockey team, the Columbus Blue Jackets, leads 2 to 1 in the second round of the Stanley Cup playoffs against the Boston Bruins.

The Blue Jackets’ 2018-19 campaign is the organization’s most successful since its founding in 2000. The team owes its existence to one of Ohio’s most notable manufacturers, John McConnell — founder of Worthington Industries. Prior to the establishment of the Blue Jackets, the last NHL team in Ohio was the Cleveland Barons, which played from 1976 to 1978.

As you read this, we hope the Jackets will have smacked down the Bruins, and are up 3 to 1 in the best-of-seven series. Go Jackets!