Householder’s Son Is Among 19 That Applied for Vacant Seat

A week after former Rep. Larry Householder (R-Glenford) was voted out of the legislature by his House colleagues for “disorderly conduct” related to the House Bill 6 scandal, his son — Derek Householder — has applied to fill the legislative seat. He’s one of at least 19 candidates who want to be the next 72nd House District representative. House Speaker Bob Cupp (R-Lima) has said his caucus will move quickly to fill the vacant seat. 6/24/2021

Lima, Ohio has been ranked as the nation’s No. 3 smaller city for manufacturing by a new study. AdvisorSmith Solutions Inc. compared nearly 300 cities with 150,000 or fewer residents and found that Lima’s manufacturing output per capita was $43,687, compared to the U.S. average of about $7,200. Lima had 108% more manufacturing jobs than the average city. And among the top 50 cities of all sizes, Lima ranked fifth. 6/23/2021

President Joe Biden announced this week that the administration and a bipartisan group of lawmakers have reached an infrastructure deal worth $1.2 trillion over eight years. Ohio’s U.S. Sen. Rob Portman (R-Ohio) attended the announcement. According to reports, the plan would fund transportation programs — including roads, bridges, airports, and electric vehicle infrastructure — as well as water infrastructure, broadband, environmental remediation, power infrastructure, and other areas.

National Association of Manufacturers President and CEO Jay Timmons said the announcement “shows that governing with big ideas is still possible in America” — and that “bold infrastructure investment will secure a better future for our nation and industry.” 6/24/2021

At a Glance: China’s Share of Global Exports Over 40 Years

Forty years ago, China produced less than 1% of the world’s exports. But as illustrated by this animated infographic by Visual Capitalist, the communist nation now accounts for nearly 15% of all exports — spurred by decades of tax incentives and foreign investment, as well as China’s membership in the World Trade Organization. 6/21/2021

More than 80 members participated in this week’s OMA Government Affairs Committee meeting, held virtually. Chaired by Scott Corbitt, region vice president for Anheuser-Busch, the meeting included a visit from Ohio Secretary of State Frank LaRose, who discussed legislation (House Bill 294) to further reform Ohio’s election laws. LaRose told members that the bill is not a response to Ohio’s 2020 elections — which he called the most successful in state history — but would make several changes to address long-held, bipartisan concerns of local election officials.

While globalization and the drive to reduce costs have resulted in highly efficient supply chains, those supply chains aren’t always resilient, as exposed by COVID-19. OMA Connections Partner RSM says that manufacturers — especially auto suppliers — can protect themselves with a so-called “plan for every part” to help ensure their supply chains are stable. Read RSM’s insights. 6/16/2021

Juneteenth is the oldest nationally celebrated commemoration of the ending of slavery in the U.S. The holiday commemorates June 19, 1865, when Union soldiers brought the news of freedom to enslaved people in Galveston, Texas — about two-and-a-half years after the Emancipation Proclamation freed slaves in the Southern states. 6/17/2021

On Tuesday, June 8, the OMA held its annual meeting and Q2 board meeting. Key actions taken by the board included the election of officers and new directors.

Dale Laws, Whirlpool Corporation’s vice president of manufacturing operations, was elected chairman by the OMA board of directors. He has served on the OMA board since March 2016. (Read the OMA’s news release.) 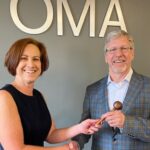 Cundiff, Lake Elected to OMA Board

As part of the OMA annual meeting and quarterly board meeting held earlier this week, the following directors were elected to the OMA board:

The OMA board is currently comprised of 30 Ohio manufacturing leaders, representing manufacturers of all sizes and sectors within the industry and from all regions of the Buckeye State. 6/8/2021

Ohio’s total employment is predicted to increase at an annual rate of 2.82% for the next six months, according to latest the leading indicators report from the Department of Job and Family Services. Ohio’s average weekly manufacturing hours were 42.1 in April, unchanged from March.