Ohio EPA has two upcoming educational events that may be of interest to manufacturers.

The agency’s Jan. 8 webinar will detail its 2020 Recycling & Litter Prevention Grant application process and those activities targeted by this grant program. A Feb. 13 webinar will cover Ohio’s universal waste rules, which are intended to promote recycling as well as proper disposal by easing certain regulatory requirements. 12/18/2019

This week, on a 57-35 vote, the Ohio House passed House Bill 242. The bill would pre-empt local governments from placing taxes or outright bans on auxiliary containers — such as bottles, cans or bags. HB 242 is supported by the OMA.

The legislation has become a political flashpoint in recent weeks — not only in Ohio, but across the country. The Senate continues to debate HB 242’s companion bill (Senate Bill 222), and will now have the House version to consider, as well. The governor recently weighed in on the issue, stating he did not want to see the legislation passed in the House.

During the last General Assembly, the House also passed a version of the pre-emption legislation, but it failed to get Senate approval. The OMA will continue working to get this proposal enacted in 2020. 12/12/2019

This week, the Ohio Senate held its third hearing on Senate Bill 222 — an OMA-supported bill that would pre-empt local governments from enacting taxes or bans on auxiliary packaging such as bags and containers. A litany of opponents testified on Tuesday, including the mayor of Bexley, whose city recently enacted a law to ban plastic bags.

Speaker Larry Householder announced Tuesday that he would like to get his chamber’s version of the bill, House Bill 242, passed prior to year’s end. But a day later, Gov. Mike DeWine was quoted as saying he does not support the legislation, adding that its passage would be “a mistake.”

The Senate will continue its consideration of SB 222. More to come as this issue continues to play out. 12/5/2019

The plan, released in conjunction with Ohio EPA and the Ohio Department of Health, would coordinate testing for nearly 1,500 public water systems that supply water to roughly 90% of Ohio’s population. If PFAS chemicals are detected, the state will work with local health departments to provide information to the system owners. This information will range from how to get additional testing, reducing exposure, and point-of-use treatment. The water sampling is expected to be completed by the end of 2020. A website has been developed to keep Ohioans informed.

The OMA has created a working group to work to address PFAS-related issues and possible impacts to Ohio manufacturers. If you would like to learn more or participate, contact Rob Brundrett at the OMA. 12/5/2019

The DeWine Administration has unveiled the first wave of wetland projects aimed at improving water quality in Lake Erie and throughout Ohio as part of the H2Ohio initiative. This first wave of H2Ohio projects are:

The aim of the projects is to create wetland vegetation to absorb phosphorus and other pollutants that would otherwise enter waterways including Lake Erie and fuel harmful algal blooms. The Ohio Department of Natural Resources has more details. 11/25/2019 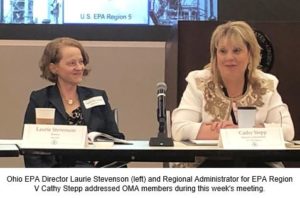 The OMA, along with the law firm of Steptoe & Johnson, this week hosted a manufacturers’ meeting at the U.S. Environmental Protection Agency’s Region V headquarters in Chicago.

More than 45 industry members met with senior leaders from Region V and Ohio EPA. The meeting provided a valuable opportunity for OMA members to learn more about EPA policies and practices, while building relationships with agency officials. 11/20/2019

This week, the OMA provided proponent testimony on Senate Bill 222. The bill would allow the state to pre-empt local government ordinances on packaging and auxiliary containers.

The bill is expected to have at least two more hearings in the Senate committee. 11/14/2019

Gov. Mike DeWine has presented specific details regarding his H2Ohio initiative, aimed at reducing harmful algal blooms, improving wastewater infrastructure, and preventing lead contamination. In a speech at the National Museum of the Great Lakes in Toledo, the governor said the plan would address “the causes of Ohio’s water problems, not just the symptoms.”