This Ohio EPA webinar on Wednesday, February 20, 2019 at 10:00 a.m. will explain the Ohio-specific rule to conditionally exclude contaminated wipes and apparel (that are not currently excluded under the solvent wipe rule) from regulation under the hazardous waste regulations when certain conditions are met.

Apparel would include, but not be limited to, gloves, uniforms, smocks, and coveralls that are laundered and intended for reuse.

The Ohio EPA presenter will be Tammy McConnell from the Division of Environmental Response and Revitalization (DERR).

Ohio EPA recently issued comment to U.S. EPA regarding its proposed guidelines for greenhouse-gas emissions from existing electric utility generating units. The Trump administration proposed the air pollution guidelines known as the Clean Air Act (CAA) to replace the far-reaching Clean Power Plan (CPP) which had been proposed by the Obama administration.

In his cover letter, Ohio EPA Director Craig Butler highlighted the market-driven transformation taking place in the Ohio energy and electric sector. The director wrote: “ … Ohio’s generation mix is being positively influenced by shale gas, renewables and energy efficiency which is keeping costs low, as well as reducing emissions. This is being accomplished without additional regulatory burden …”

Check out this table included in the Ohio EPA comments; it depicts how Ohio CO2 emissions from power generation have been reduced 38% from 2005 levels. 12/13/2018 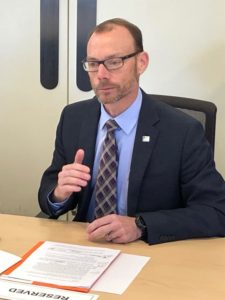 This week Ohio EPA Director Craig Butler met with members of the OMA Environment Committee. The director provided an overview of his five-year tenure at the helm of the agency. Members talked with the director about a variety issues from agency fees to administrative proposals.

The members also heard an update regarding the U.S. EPA’s ‘Waters of the U.S.’ rule, including the most recent litigation updates and new rules proposed this week by the Trump administration. OMA environmental counsel, Bricker & Eckler, and OMA Connections Partner, Squire Patton Boggs, have summarized the latest on the rule here and here. 12/13/2018

This week Senator John Eklund (R-Chardon) provided sponsor testimony for Senate Bill 228, legislation which would increase the state fees on solid waste, doubling the municipal solid waste fee from $0.25 per ton to $0.50 per ton.

The fee increase would be used to fund the Soil and Water Conservation Districts (SWCDs) in each county. SWCDs are independent political subdivisions of state government organized along county boundaries to provide technical assistance to urban and rural land users. An elected board of local citizens provides SWCD leadership. Local offices provide education and programs. Most programs are designed for agricultural and nonpoint sources. Therefore, this bill appears to be a fee increase for almost no new benefit for manufacturers.

There was an attempt to include this proposal in the last state budget and the OMA will again be working to make sure it does not get into the next state budget. 12/6/2018

Maybe this is the year for your business to be recognized for your commitment to environmental excellence?

Here’s a recorded webinar about applying, and here’s more information. 11/20/2018

These rules are being proposed in order to comply with the five-year rule review requirement and to incorporate revisions consistent with new requirements for Total Maximum Daily Load (TMDL) limits passed in last year’s state budget bill.

That bill specifically requires the agency to adopt rules that establish procedures for providing notice to stakeholders and criteria for determining significant public interest in TMDL development.

OMA is on the record (see comment 17) regarding these proposals to ensure that manufacturers and their trade associations can request public hearings on any new TMDLs. 11/13/2018

In Case You Missed It …

Ohio EPA has multiple stakeholder opportunities with deadlines hitting over the next month. Let OMA’s Rob Brundrett know if you have any questions or would like to comment.

This proposed rule would amend the existing NOx SIP Call regulations to allow states to revise their SIPs to replace the current requirements for certain sources to monitor emissions with alternate monitoring requirements. The proposal would also eliminate obsolete provisions and make non-substantive clarifications to the remaining regulations.

In its comments OMA wrote, “The proposal would allow alternative monitoring to costly Part 75 CEMS while still providing the necessary assurance that covered units are achieving the required emission reductions under the NOx SIP Call.”

This would be a new rule intended to contain Ohio’s standards for eutrophication endpoints in Ohio’s Large River Assessment Units. Large rivers are those that drain over 500 mi2.

This new proposed rule would establish nutrient standards for these large rivers. In addition, a target phosphorus concentration is being considered for river segments that are over-enriched as demonstrated by the standard.

OMA’s comments dove into the technical aspects of the proposal and questioned portions of the ESO. OMA requested that Ohio EPA convene a stakeholder group to provide interested-party feedback, expert support, and industry analysis as part of the rulemaking process for this important nutrient rule.

Thank you to the member companies which submitted comments on this issue. And thank you to the OMA nutrient working group members for your help and feedback with the comments.

Ohio EPA is holding a webinar on the proposal on November 5. You can register here. Please contact Rob Brundrett for more information on this issue. 10/29/2018