The OMA-led initiative to expand Ohio EPA’s definition of universal waste to include more items, among them, paint and paint-related wastes, took another step forward this week.  The OMA working group submitted comments on Wednesday in reaction to Ohio EPA’s universal waste proposal.

The OMA has been working closely with Ohio EPA over the past two years to expand Ohio’s universal waste program to include items now considered hazardous wastes, thus providing waste management relief for Ohio manufacturers.

The OMA commented on a variety of issues from storage to transportation to management standards.  If all goes according to plan, Ohio EPA will review and accept OMA’s comments and issue a final rule in early 2017.

Thank you to the members who participated in drafting comments.  12/22/2016

In the first set of comments, the OMA and business allies recommended: 1) modify the proposed definition of “malfunction” to remove the exclusion for equipment failures caused only in part by poor maintenance or careless operation; 2) modify the scheduled maintenance rule to allow owners or operators to continue operating when shutting down would be unsafe; 3) modify the malfunction rule to impose work practice standards during equipment failures; 4) expand the availability of alternative emission limits to minor sources; and 5) allow the adoption of alternative emission limits that are not equivalent to emission limits applicable during normal operation.

In the second set of comments, the OMA alone submitted detailed concerns about the regulations’ adverse business impact, how the regulations were developed, and specific problematic language in the regulations.  12/15/2016

Does your business have waste material or product that can be re-used by another business?

If you answered yes, then the new Ohio EPA Ohio Materials Marketplace launching in January 2017 might interest you.  Material exchanges connect entities so they can re-use or recycle by-products or waste materials.

Complying with Your Air Permit

You have identified equipment and processes at your facility that are sources of air pollution, and submitted applications for these sources to Ohio EPA or your local air agency.  Now that you have received your air permit, have you met all your regulatory requirements under Ohio EPA’s air program?  Not exactly.

Your air permit is your written authorization from Ohio EPA (or local air agency) to install and operate equipment or conduct activities that release pollutants into the air.  Your permit includes all conditions and requirements to operate your air pollution source in accordance with state and federal air quality requirements.  This article from Ohio EPA will help you understand common air permit requirements and steps you can take to improve your compliance.  12/5/2016

The OMA has been instrumental in advancing these beneficial rules.  Comments are due December 21, 2016.  The draft rules and related documents are available for download here; see the Interested Party Tab.  Contact OMA’s Rob Brundrett for more information.  12/1/2016

On November 24, Ohio EPA issued a public notice that it will issue a draft general National Pollutant Discharge Elimination System (NPDES) permit for the statewide regulation of storm water associated with industrial activities.

A public hearing is scheduled for January 9, 2017.  Additionally, written comments can be submitted.  All relevant documents can be found here.  OMA has been engaged with Ohio EPA on this issue and will file additional comments.  Contact OMA’s Rob Brundrett for more information.  12/1/2016

While some of President-elect Trump’s priorities in the environmental and energy policy areas are largely uncontroversial—such as continuing the push toward U.S. energy independence—the new administration is likely to encounter pushback on the more contentious elements of its agenda, including the revival of the Keystone Pipeline Project and the withdrawal from international climate change efforts such as the Paris Agreement.

This Commentary from OMA Connections Partner Jones Day explains the practical and logistical issues Mr. Trump can expect as he pursues his policy goals, along with the related implications for the energy sector.  11/17/2016

Ever hold employee or community events?  Ohio EPA’s Division of Environmental and Financial Assistance (DEFA) developed this guide to help event planners reduce waste through recycling, composting and source minimization.  This general resource guide that can be applied to a wide variety of small and large events, held at inside or outside venues.

A zero waste event minimizes the amount of waste going to a landfill by diverting materials for re-use, recycling or composting.  An event is typically considered to be zero waste if at least 90% of the waste generated is diverted.  11/10/2016

Attorney General Mike DeWine, on behalf of the State of Ohio and 30 other states, filed a brief this week in the U.S.Court of Appeals for the Sixth Circuit with regard to Murray Energy Corporation, et al. v. U.S. Environmental Protection Agency, et al.

Our attorney general argues that the rule goes far beyond what was intended by Congress when it passed the Clean Water Act, and that a state-based approach to protection of waterways would be much more effective.  11/2/2016 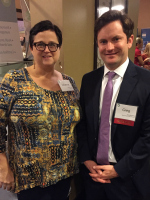 More than 300 members of the regulated community and EPA agency staff gathered in Chicago this week for the second annual Midwest Environmental Compliance Conference.

“We know of nothing like it anywhere for gathering current compliance information and support, and making important connections,” said OMA’s Rob Brundrett, director, Public Policy Services.  OMA is a conference sponsor.  11/3/2016