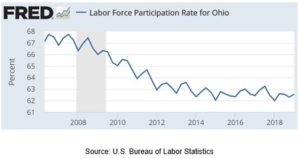 Recent research from the Federal Reserve shows the main reason for the participation rate decline continues to be baby boomer retirements. But another key factor is the steady decline in the participation of prime-age workers, especially men ages 25-54. (The participation rate for U.S. men has fallen from 86% after World War II to roughly 69% today.) Financial publication TheBalance.com cites the rise in disabled workers as another driver, fueled in part by drug use and obesity-related diseases. (The Social Security Administration’s disability payroll roughly tripled from 1990 through 2014, peaking near 9 million.) 7/16/2019