This week, the OMA led a Statehouse meeting between key industry leaders and Lt. Gov. Jon Husted to discuss the role of automation and robotics as drivers of Ohio’s economy and future manufacturing growth. The DeWine-Husted administration has made this area a focal point for Ohio’s workforce development.

The OMA has created a process to engage both equipment manufacturers and their manufacturing customers to develop strategies that will protect and grow Ohio’s industrial base. Manufacturers who want to be more engaged in industry efforts can let us know by opting into OMA’s workforce community. 12/5/2019

Lt. Gov. Jon Husted this week met with an OMA-led coalition on ways to advance the state’s system of workforce development for automation and robotics.

Ohio’s overall jobless rate held steady at 4.2% last month, but unemployment varied significantly among the 88 counties. According to the monthly map from the Ohio Department of Jobs and Family Services, Mercer County once again claimed the lowest rate at 2.6%. Putnam, Medina, Wyandot, Geauga and Lake counties were also below 3.0%. 11/25/2019

In the Spotlight: MVMC Apprenticeship Program

The Mahoning Valley Manufacturers Coalition (MVMC) — one of Ohio’s industry sector partnerships — recently celebrated the first graduates of its machinist apprenticeship program. As reported in Youngstown’s The Business Journal, one of the graduates, Adam Johnson, completed his apprenticeship at Brilex Industries, which was an early adopter of the MVMC apprenticeship model.

Jessica Borza, executive director of MVMC, said the apprenticeship program is a perfect illustration of companies working together instead of standing alone. “It’s a new way of doing business,” she said. 11/18/2019

Build Your Case as an Employer of Choice

In this 45-minute recorded webinar, the firm’s president, Taylor Evans, says manufacturers must “sell their workplace” to counter common misperceptions about the industry — all while being cognizant of their facility’s appearance, the competitiveness of their employee benefits, and the culture of their workplace. He encouraged manufacturers to engage younger students through activities such as facility tours to build their reputation as an employer of choice. 11/20/2019

It was announced late last week that Ohio’s unemployment rate held steady at 4.2% in October. That’s compared to the national rate of 3.6%.

Ohio’s goods-producing industries lost 3,200 jobs, as losses in manufacturing (-2,300) and construction (-1,000) exceeded gains in mining and logging (+100). The Office of Budget and Management points out that the UAW’s strike against GM depressed industrial production during both September and October.

This week, the Ohio Senate approved House Bill 2, legislation that would provide funding for the new TechCred program and industry sector partnerships.

However, HB 2 heads to conference committee with members of the House and Senate holding differing opinions on the Individual Micro-Credential Assistance Program, which is designed to reimburse training providers. It’s anticipated the House will reject the Senate amendments to the bill, thereby setting up House-Senate negotiations during the final weeks of the session.

This delay will push back the availability of funds to qualified industry sector partnerships. 11/14/2019

Just a few weeks ago, more than 500 individuals from across Ohio took part in the OMA’s third annual Ohio Manufacturers’ Workforce Summit in Columbus. Now you can see photos from the event posted on the OMA’s Workforce Services page. 11/11/2019 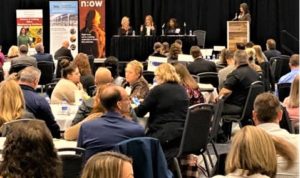 Here’s a new case study that spotlights the partnership between the Dayton Region Manufacturers Association (DRMA) and Dayton’s Stebbins High School. Together, the organizations raised student awareness of manufacturing careers by hosting Manufacturing Night during a recent football game. The event featured Making Ohio T-shirts, manufacturing facts on the scoreboard, and the announcement of an $8,000 scholarship fund. (Making Ohio is a brand and campaign launched by the OMA to promote careers in manufacturing.)

This is a good example of local leadership working together to recruit talent into manufacturing. If you’re interested in using the Making Ohio brand for your recruiting efforts, contact your local sector partnership or OMA staff. 11/5/2019

After several hearings and an omnibus amendment, the Senate Finance Committee this week advanced House Bill 2. The bill, which provides funding for the TechCred program and industry sector partnerships, moved unanimously from committee.

Prior to committee passage, members accepted an omnibus amendment that made numerous changes to the more controversial Individual Microcredential Assistance Program (IMAP).

Another change made by the committee — this one championed by the OMA — replaced the term “regional sector partnership” with “sector partnership network.” This clarifies that partnerships can work together to receive grant funding. HB 2 was scheduled to be voted on the Senate floor earlier this week; however, one of the bill’s sponsors had the vote delayed for a possible last-minute amendment, according to news reports. 11/7/2019

This week, more than 525 individuals from across Ohio took part in the OMA’s third annual Ohio Manufacturers’ Workforce Summit at the Greater Columbus Convention Center in Columbus. See photos from the summit here.