MVMC Celebrates a Decade of Success

Last week in Canfield, manufacturing leaders were joined by local and state officials to celebrate the tenth anniversary of the Mahoning Valley Manufacturers Coalition (MVMC). Over the decade, the organization has collaborated frequently with the OMA on workforce services initiatives, and is one of 13 OMA-endorsed local sector partnerships.

The event featured dinner, networking, and keynote speaker Lydia Mihalik, director of the Ohio Department of Development, as well as OMA staff. Mihalik called the MVMC a model for the rest of the nation. Jessica Borza, MVMC executive director, was recognized for her leadership in establishing new talent pipelines through MVMC’s pre-apprenticeship and manufacturing mentorship programs. 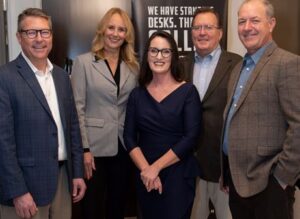