At a Glance: Ohio’s Manufacturing Growth Since March 2010 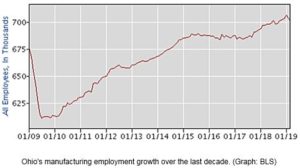 Ohio has experienced a sizable expansion in manufacturing employment since emerging from the depths of the last recession. Over the past nine years, the number of Ohio manufacturing jobs has jumped by more than 14% (about 87,500 jobs).

Federal data show the Buckeye State had approximately 613,800 manufacturing positions in March 2010, when U.S. financial markets hit their lowest point for the recessionary period between fall 2007 and summer 2009. Nine years later, in March 2019, Ohio had roughly 701,300 manufacturing jobs, according to the Bureau of Labor Statistics. 4/29/2019