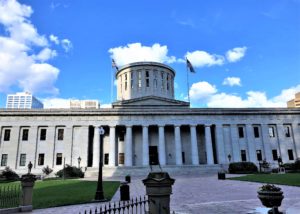 This week, the Senate Insurance and Financial Institutions Committee began its work on House Bill 80, the Ohio Bureau of Workers’ Compensation (BWC) budget.

As we reported last week, the House-passed version of HB 80 contains a variety of provisions that would be detrimental to Ohio’s business climate. This includes the expansion of workers’ comp benefits for mental or emotional impairment caused by post-traumatic stress disorder (PTSD) for first responders — even when there is no physical injury. Other harmful provisions include restricting an employer’s right to negotiate settlement terms; eliminating the current definition of an employee; and penalizing employers for accidentally misclassifying employees.

At this week’s Senate hearing, bill sponsor Rep. Scott Oelslager provided sponsor testimony and BWC Administrator Stephanie McCloud provided testimony on behalf the BWC. The bill is expected to have multiple hearings over the next week. The OMA and other business allies continue to oppose the bill based on the House’s harmful changes. 6/13/2019