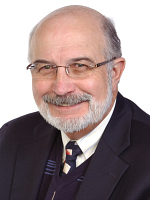 In introducing Hanna at a private Statehouse ceremony, BWC Administrator/CEO Sarah Morrison credited the veteran pharmacist and his team for initiatives that have lowered BWC drug costs by $46 million over the last seven years and reduced opioid doses by 18.9 million to nearly half their 2011 levels.

Hanna joined BWC in May 2009 after a career working in the nonprofit health care sector and a four-year term on the State Board of Pharmacy in the 1990s. He is credited with building BWC’s modern pharmacy department and crafting measures designed to mitigate the potential for opioid addiction or dependence.

The Governor’s Award for Employee Excellence is awarded to individuals and groups of state employees for work-related achievements that have made a significant impact on the general public or in the life, safety or property of others, as well as enhanced the state’s image, improved government functions and saved money or increased revenues.  4/17/2017