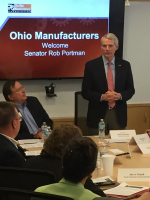 This week Senator Rob Portman visited the OMA to discuss tax reform with OMA members. The senator, who is a leader on the tax reform issue, talked about the chances of reform and asked for input from members.

Portman said that the “perfect is the enemy of the good” with tax reform, and that passage will depend on all parties being willing to compromise. He emphasized the tremendous disadvantage the current tax regime places on American manufacturers relative to European and Asian competitors.

He invited OMA members to work with him and his staff to help move reform forward.  6/1/2017