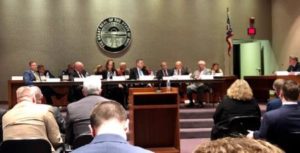 In response to declining state gas tax revenue and increased transportation infrastructure needs, members of Gov. DeWine’s Advisory Committee on Transportation Infrastructure concurred with hiking the gas tax and considering other revenue generators including a fee on non-motor-fuel powered vehicles.

The committee heard testimony from a variety of advocates including ODOT Director Jack Marchbanks who testified that Ohio’s transportation system is “facing an impending crisis” absent an increase in funding.

Specific recommendations are likely to be forthcoming in time for the state transportation budget which must be completed by the end of April.

Representatives of OMA member companies Eaton and Honda of America Manufacturing, participated on the advisory committee.

Look for a full report at the OMA Government Affairs Committee on March 6. 2/7/2019