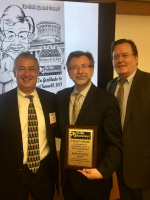 At its meeting this week, the OMA board of directors gave Kurt Tunnell, managing partner, Bricker & Eckler, its Legacy Award for his long service to the OMA and its board.

Kurt has been the OMA’s general counsel since 1995. Kurt is stepping down from Bricker at the end of January.