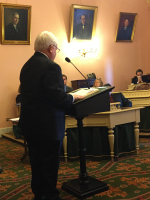 Together with its business allies, the OMA testified on HB 394, the unemployment compensation reform bill, to set the record straight on erroneous and misleading testimony from the bill’s opponents (unions and certain social service agencies).  The Ohio unemployment compensation fund is insolvent, resulting in higher and higher charges to Ohio’s job-generating businesses.

Two examples from the testimony that show the bill’s provisions are in line with other states’ programs:

Reduction in number of weeks of allowed benefits from 26 to 12 – 20:  “The recent trend among states addressing UI solvency has been to reduce the number of potential weeks of unemployment based on the total unemployment rate. Effective January 1, 2016, Missouri joined the growing list by changing to a sliding scale of 13 – 20 weeks. Other states with similar provisions include Kansas 16 – 26, Florida 12 – 23, Georgia 14 – 20, and North Carolina 12 – 20. Michigan and South Carolina also reduced their maximum number of weeks to 20 from 26.”

The testimony was presented by Doug Holmes, president of UWC in Washington, D.C., on behalf of the OMA, Ohio Chamber of Commerce, NFIB-Ohio, Ohio Farm Bureau, and Ohio Council of Retail Merchants.