Late last year, longtime OMA President Eric Burkland announced his retirement after leading the association since 1989. Delayed by COVID-19, a ceremony to recognize Eric and his 31 years of service to Ohio manufacturers had finally been planned for last month — only to be cancelled due to the latest surge of the virus.

Despite the lack of a formal retirement event, Eric’s decades of work to protect and grow Ohio manufacturing are being recognized by policymakers and leaders of industry. This video tribute features well wishes and reflections from Gov. Mike DeWine, former Govs. Ted Strickland and Bob Taft, U.S. Sens. Rob Portman and Sherrod Brown, and National Association of Manufacturers (NAM) President and CEO Jay Timmons.

Timmons, an Ohio native who was in Columbus this week for a Creators Wanted event, presented Eric with an American flag that was flown over the U.S. Capitol in his honor, as well as an Ohio-made glass sculpture. Meanwhile, the OMA board has named a conference room at OMA’s Columbus headquarters in honor of Eric. Check out the Burkland Conference Room entrance and plaque. 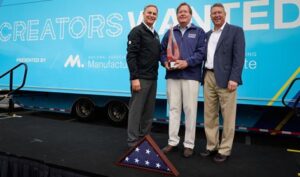 Jay Timmons (left) of the National Association of Manufacturers this week recognized Eric Burkland for his 31 years of leadership at the OMA. Also pictured is current OMA President Ryan Augsburger.