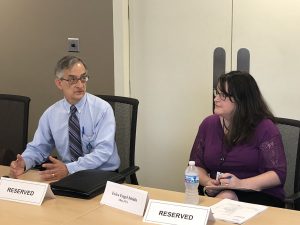 This week manufacturers gathered at the OMA to attend an Environment Committee meeting, which included networking plus lunch on the OMA.

The committee’s agenda included an update on possible phosphorus legislation and discussion with Ohio EPA regarding permit process improvements.

State Rep. Steve Arndt (R-Port Clinton) came by to discuss what is going on in the General Assembly and to tell members about his recently introduced bill, House Bill 643, a plan to deal with Lake Erie algal blooms. 5/31/2018