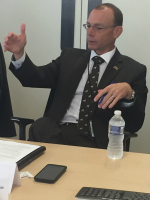 He brought good news:  Both the Industrial Storm Water Permit and the new Universal Waste Rules should be coming out in the very near future.  Members of the committee, and staff, have worked hard on these issues for months.

The director talked about other agency priorities, including the continuing fight against algal blooms on Ohio’s surface water, most importantly Lake Erie, and continuing to lead the charge against the Army Corps of Engineers on Port of Cleveland dredging, which is vital to Ohio’s manufacturers.  10/20/2016