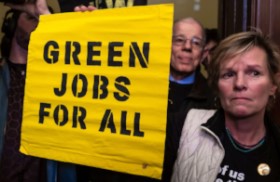 In the latest issue of its “Climate Report,” global law firm Jones Day analyzes the Green New Deal proposed by some federal lawmakers. According to the firm, the resolution — which calls for “high-quality union jobs that pay prevailing wages” and “wage and benefit parity for workers affected by the transition” — signifies a “new phase in the national debate over climate change policy in America.”

Specifically, the Green New Deal poses the question “whether Congress should curtail fossil fuel use … through a broad array of social and economic reforms and public works projects.” Jones Day adds: “The potential impact of the ensuing debate will vary from company to company but, in almost all cases, warrants serious attention in business, political, and legal planning efforts.”