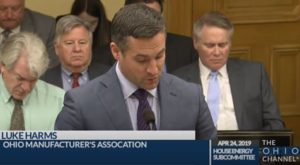 On Wednesday at the Ohio Statehouse, Whirlpool Corp.’s Senior Manager of Government Relations Luke Harms testified on behalf of the OMA at a hearing on House Bill 6 — legislation that would impose new charges on electric customers in order to subsidize uneconomic generation facilities. (Harms’ testimony begins at 36:19 of this video.)

The OMA opposes HB 6 and was one of 100 organizations or individuals testifying this week against the proposal. If passed and signed into law, the aggregate cost of HB 6 to Ohio customers is estimated to exceed $300 million per year, indefinitely.

In his testimony before the House Energy Generation Subcommittee, Harms told lawmakers HB 6 would create “multiple new costs and new forms of costs for manufacturers.” He also noted that the bill seemingly would penalize companies like his that are using renewable, on-site electrical generation.