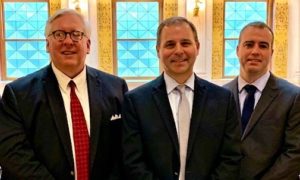 A panel of OMA members appeared before the Senate Energy & Public Utilities Committee on Tuesday, June 18, to share reasons why House Bill 6 is bad for manufacturers.

OMA Energy Committee Chair Brad Belden, president of Belden Brick Co. of Canton, told senators the bill would directly increase his company’s electricity costs. Belden said, “There are a lot of moving parts in HB 6 and the math is not as simple as some would have us believe. For Belden Brick, we estimate the net direct cost of the Clean Air Program, OVEC subsidies and increased capacity costs — minus the renewable portfolio standard costs — is about $40,000 per year, plus a lot of other blank checks that could dwarf the cost increase I just shared with you.”

David Johnson, CEO of Summitville Tiles in Columbiana County, reminded lawmakers of the importance of deregulating Ohio’s generation segment. The former OMA chairman noted that Ohio started the deregulation process two decades ago, and that it has produced upwards of $3 billion in savings per year for Ohio’s ratepayers.

Anthony Smith, global energy coordinator for Cooper Tire and Rubber in Findlay, highlighted how the bill also provides subsidies for the utility owners of two coal power plants, including one in Indiana. He informed senators that newly updated cost estimates show that under HB 6, ratepayers would be charged an additional $488 million. His testimony included a rebuttal of several myths espoused by bill supporters. 6/18/2019

Testifying against House Bill 6 this week were OMA members (from left) David Johnson of Summitville Tiles, Brad Belden of Belden Brick Co., and Anthony Smith of Cooper Tire and Rubber.