Ohio Shale Investment Reaches $74B Since 2011 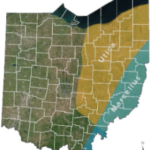 A new report by Cleveland State University’s Energy Policy Center reveals that investment in the shale energy sector in eastern Ohio has reached $74 billion since tracking began in 2011. Findings of the study were reported by JobsOhio.

Indirect investments, such as development of new manufacturing in the area as a result of lower energy costs, were not included in the study.

Other recent studies have estimated that the Utica and Marcellus shale regions in Ohio, West Virginia and Pennsylvania will soon supply as much as 45% of U.S. natural gas production. 04/23/2019