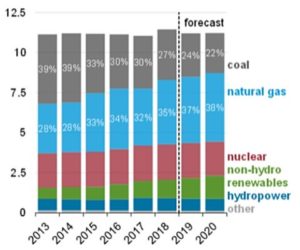 Renewable sources for electricity generation are growing rapidly, according to a report by the U.S. Energy Information Administration.

In Ohio — the nation’s eighth largest net electricity producer — coal remains the largest fuel source at 47%, followed by natural gas at 35%, according to the EIA. Industrial sites account for roughly one-third of all Ohio’s electricity consumption. 5/1/2019