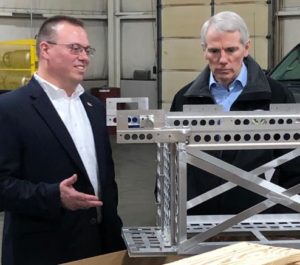 National Association of Manufacturers President & CEO Jay Timmons is on a two-week sweep through eight states to spotlight the importance of manufacturing and to recruit talent for the future of manufacturing.

Here is a link to a video of the State of Manufacturing remarks that Timmons delivered in Houston, TX, to an audience including students at Lone Star College (or read the remarks here). He is introduced by Gerald Napoles, Ph. D., President of Lone Star College North Harris campus. In his remarks, Timmons challenges the young people in the audience to consider manufacturing careers and also calls for Congress to act on infrastructure, trade, and immigration reform.

Meanwhile, in a NAM and OMA event this week, Staub Manufacturing Solutions in Dayton hosted a roundtable of manufacturers with Senator Rob Portman. Steve Staub, president and co-owner, is on the OMA and the NAM boards of directors. Senator Portman and the manufacturers discussed the impact of tax reform on the manufacturing industry, concerns about trade policy, and solutions to close the skills gap and invest in a modern manufacturing workforce.