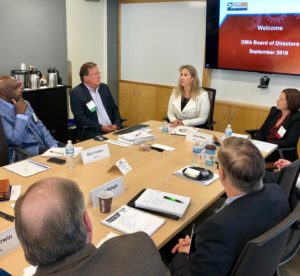 On Tuesday, Sept. 17, the OMA’s board of directors held its quarterly meeting at OMA headquarters. Key actions included the board’s election of the following new directors:

Directors heard from guest speakers, including Ohio Bureau of Workers’ Compensation (BWC) CEO/Administrator Stephanie McCloud, who briefed the board on the BWC’s Better You, Better Ohio!™ — a free health-and-wellness program for workers of small and mid-sized businesses in higher-risk industries, including manufacturing. She also discussed the BWC’s recent 20% reduction in the average premium rates paid by private employers.

This week’s board meeting, which was heavily focused on workforce development and energy policy, was the first under the leadership of new OMA Chairman Jane Neal, senior vice president of AMG Vanadium. During the meeting, OMA General Counsel Chris Slagle of Bricker & Eckler was presented a memorial donation from the board to the Tunnell Leadership Development Program — established by former OMA General Counsel Kurt Tunnell, who passed away last month. 9/17/2019

Ohio BWC CEO/Administrator Stephanie McCloud was among the guest speakers at this week’s meeting of the OMA’s board of directors.