On Wednesday of this week, the Ohio Senate voted 22-9 to approve Senate Resolution 376, offered by Senate President Larry Obhof (R-Medina) to urge Congress to ratify the U.S.-Mexico-Canada Agreement (USMCA), which would modernize the 25-year-old North American Free Trade Agreement. Earlier in the day, Ryan Augsburger, public policy services managing director for the OMA, testified before the Senate Transportation, Commerce and Workforce Committee in support of SR 376.

Politico reported this week that some leaders on Capitol Hill “are growing more concerned that USMCA will not get to the finish line” as Congress has only 20 days remaining in the 2019 session.

As noted in a recent editorial by OMA President Eric Burkland, approximately 103,000 Ohio manufacturing jobs rely on exports to Canada and Mexico, as one in three Ohio manufacturers export to one or both countries. 10/23/2019 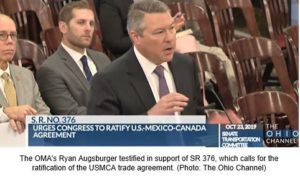