The Supreme Court of Ohio ruled Wednesday that customers of FirstEnergy Ohio utilities have been overcharged by hundreds of millions of dollars since 2017. In a 4-3 decision, the Court said the Public Utilities Commission of Ohio (PUCO) improperly authorized the utilities to impose surcharges for grid modernization subsidies, and ordered the charges to be removed immediately.

An estimated $450 million has already been unlawfully collected from FirstEnergy customers, according to OMA’s energy experts ($204 million in 2017; $168 million in 2018; and $84 million for the first half of 2019). Under current state law, none of this nearly half-billion dollars is refundable to customers.

Fortunately, the foregone costs or savings brought by this week’s legal victory is approximately $84 million — and the Court’s ruling prevents FirstEnergy from possibly collecting another $336 million during 2020-21, had PUCO approved a pending request to extend the surcharge.

This week’s Court decision comes as FirstEnergy continues to urge lawmakers to include a provision in the state budget (House Bill 166) that would allow its operating companies to keep “significantly excessive profits” rather than issuing refunds to more than a million customers, including manufacturers. 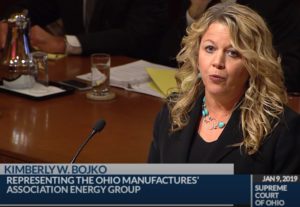