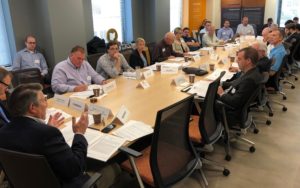 Chaired by Brad Belden, president of The Belden Brick Co., the committee heard expert analysis of the nuclear bailout bill, as well as other energy issues currently before policymakers — including a provision in the House-passed version of the state budget (HB 166) that would alter Ohio’s current prohibition of excessive profits by utilities. The new language, which is opposed by the OMA, would allow FirstEnergy operating companies to keep “significantly excessive profits” rather than issuing refunds to more than a million customers.

OMA’s Energy Committee heard the latest analysis of the nuclear bailout bill during its May 30 meeting.